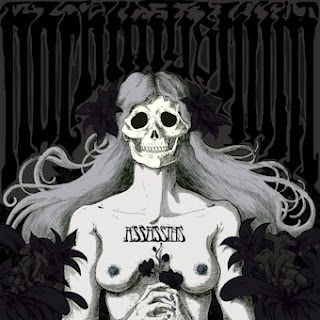 Nachtmystium are a band from Chicago, Illinois that has been around since the mid 90's that started out as a more primal sounding black metal band but created their own style of black metal with this release and this is a review of their 2008 album "Assassins-Black Meddle Part 1" which was released by Century Media Records.

Drums range from slow, mid paced to fast drumming with some blast beats being thrown in at times, while the synths have a very psychedelic sound to them that have a lot of 70's progressive rock influences as well as some noise effects that bring an avant garde feel, as for the bass playing it has a very thick, dark and heavy tone to it which is very easy to hear on certain songs.

Keyboards when they are used bring a very dark feeling to the music, while the saxophones bring a jazzy feel to the music.

Rhythm guitars range from slow, mid paced to fast black metal riffs that are also influenced by many different genres of music such as classic rock in the catchier  riffing, while the lead guitars have more of a rock feel in the solos added in with a good amount of melody and some guitar slides, as for the acoustic guitars when they are used to bring in a classic sounding rock/metal feel to the music.

Vocals are a mixture of high pitched black metal screams mixed in with a more shouting style of vocals, while the lyrics cover hateful style themes, as for the production on this recording which was recorded at Engine and Volume Studios in Chicago during the month of December sounds very professional and you can hear all of the musical instruments that are present on this recording.

In my opinion this was a good album from Nachtmystium and while their more hardcore fans considered this  recording a sell out, and they have also released new material since then, I still feel this is a good recording. RECOMMENDED TRACKS INCLUDE "Assassins" "Ghosts Of Grace" and "Your True Enemy". RECOMMENDED BUY.

Posted by OccultBlackMetal at 6:08 PM