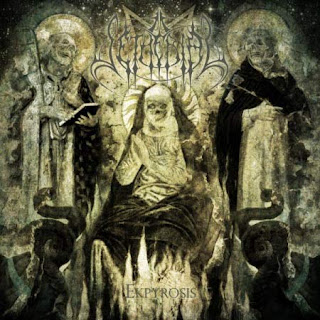 Setherial are a band from Sweden that has been interviewed by this zine before, with a history that dates back to the early 90's with a musical style that i would describe as being brutal black metal with an atmospheric and melodic edge and this is a review of their 2010 album "Ekpyrosis" which was released by Regain Records.

Drums range from slow, mid paced to fast with a lot of brutal blast beats being thrown in at times, while the bass playing has a dark tone that is overpowered by the guitars and drums and seems to follow the riffing that is coming out of the guitars.

Rhythm guitars range from slow, mid paced to fast black metal guitar riffs that are very brutal at times while retaining a slight melodic edge and a lot of skilled riffing that also has influences from other styles of metal, while the lead guitars are very chaotic and skilled black metal guitar solos that are also melodic at times.

Vocals are very high pitched black metal screams with a small amount of deep growls being used briefly on one song, while the lyrics are somewhat occultic with themes of cosmic and creation as well as dying and devourment, as for the production it sounds very heavy, powerful and professional with all of the music having a very brutal sound to it.

In my opinion this is another great album from Setherial and if you are a fan of their previous works, you will not be disappointed. RECOMMENDED TRACKS INCLUDE "We Shall Fall" "Celestial Realms Of The Cosmic Creation" and "A World In Hell". RECOMMENDED BUY.