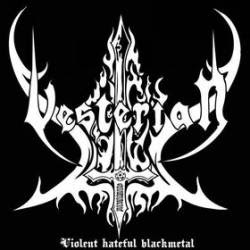 Vesterian are a band from Hollywood, California that plays a very raw and hateful form of black metal and this is is a review of their self released 2008 e.P "Violent Hateful Black Metal".

Drums range from slow, mid paced to fast drumming with a lot of brutal blast beats, while the bass playing has a very dark tone which is mixed down low in the mix and seems to follow the riffing that is coming out of the guitars.

In my opinion Vesterian are a very good raw anti christian/satanic black metal band and if you are a fan of this style you should also check out this group, they also put on a good live show which I witnessed over a year and a half ago. RECOMMENDED TRACKS INCLUDE "Violent Hateful Black Metal" and "Unseen Hordes Behind The Deafening Storms". RECOMMENDED BUY.

Posted by OccultBlackMetal at 3:11 PM