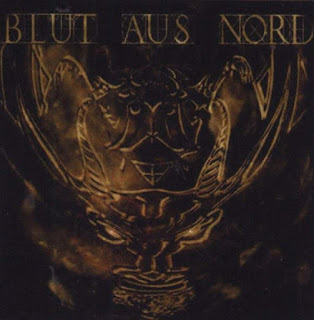 Blut Aus Nord are a band from France that has a long history, with a musical style that I would describe as being a raw and avant garde take on black metal and this is a review of their 2001 album "The Mystical Beast Of Rebellion" which was re-issued by Debember Morti during the year of 2010.

Drums are mostly fast with a good amount of blast beats mixed in with some slow to mid paced drumming that is used a lot on the last few songs, while the bass playing has a very dark tone with riffs that follow the riffing that is coming out of the guitars, as for the sound effects they have a very dark avant garde ambient feel to them..

Rhythm guitars are mostly slow, mid paced to fast black metal guitar riffs that also have a very dark avant garde and distorted feel to them as well as a doomy edge at times, as for the lead guitars when they are utilized, they have a very distorted and dark sound to them.

Vocals are mostly high pitched black metal creams, while the lyrics have a concept edge to them and deal with dark and occult topics, as for the production it is very dark and raw sounding.

In my opinion this is was a great album from Blut Aus Nord and a sign of the future direction they where going into. RECOMMENDED TRACKS INCLUDE "The Fall Chapter I, II< and IV" and "Raita I". RECOMMENDED BUY.

Posted by OccultBlackMetal at 8:10 PM