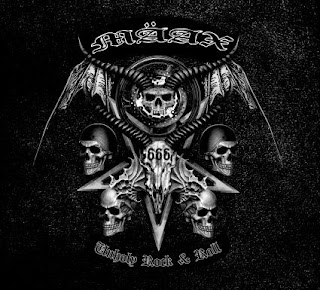 Maax are a band from Indiana that has had their previous albums reviewed as well as being interviewed by this zine that started out as being pure black metal but has evolved into a more black/thrash metal band over the years and this is a review of their 2011 album "Unholy Rock'n'Roll which was released by Abyss Records.

Drums range from slow, mid paced to fast drumming with a good amount of blast beats being thrown in, while the bass playing has a very dark tone with riffs that follow the riffing that is coming out of the guitars and at times they have a very powerful sound to them..

Rhythm guitars range from slow, mid paced to fast riffs that combine black metal with thrash and speed metal along with some occasional riffing that has a more traditional metal/rock feeling to them as well as some clean playing being utilized briefly on one song, while the lead guitars are very chaotic 80's underground metal guitar solos and leads.

Vocals are a mixture of high pitched black metal screams, deep growls and early 80's black/thrash metal type of singing as well as some occasional gang shouting and samples being used briefly, while the lyrics cover Satanism, Luciferian, Occultism, Anti Christianity rock'n'roll and thrash, as for the production it has a very raw and primitive 80's extreme metal sound to it.

In my opinion this is another great album from Maax and if you enjoyed there last recording, you should enjoy this album. RECOMMENDED TRACKS INCLUDE "Coldest Steel" "Unholy Rock'n'Roll" "Do What Thou Wilt" and "Black Thrash Em All". RECOMMENDED BUY.

www.myspace.com/maaxmetal
Posted by OccultBlackMetal at 9:44 PM