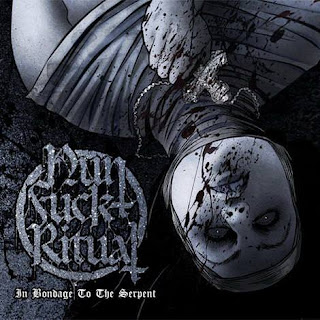 NunFuckRitual are a band from Norway with one member that lives in New York that play I style I would describe as being occultic anti christian black metal with a doom metal edge and this is a review of their 2011 album "In Bondage To The Serpent" which was released by Dember Morti Productions.

Drums are mostly slow to mid paced drumming with only a brief use of fast playing and blast beats, while the bass playing has a very strong, powerful and distorted sound to it, as for the synths which are only utilized briefly on one song they bring a very dark and evil sound to the music.

Rhythm guitars are mostly slow to mid paced black metal and only a small amount of fast riffs that have a doom metal edge along with some dark sounding melodies while the lead guitars are very dark sounding guitar leads when they are utilized.

Vocals are mostly high pitched and grim sounding black metal screams and growls mixed in with some mournful sounding cries as well as a brief use of a spoken word passage, while the lyrics cover Occult and Anti Christian themes, as for the production it has a very strong, dark and powerful sound to it.

In my opinion NunFuckRitual are a very good occult/anti christian black metal band and if you are a fan of this style, you should check out this band. RECOMMENDED TRACKS INCLUDE "Komado Dragon Mother Queen" and "In Bondage To The Serpent". RECOMMENDED BUY.