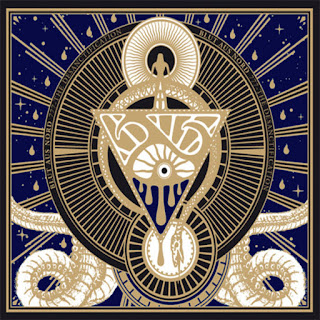 Blut Aus Nord are a band from France that has a couple of their albums reviewed as well as being interviewed by this zine with a music style that I would describe as being experimental occult avant-garde black metal and this is a review of their 2011 album "777 The Descantifacation" which is a follow up to the previous recording and continues the concept of that album and was also released by Debember Morti Productions.

Drum programming mostly concentrates on slow and mid paced beats, while the keyboards and electronics bring a very dark, depressive experimental avant-garde edge to the music with the last song having a trip hop feeling, as for the bass playing it has a very dark tone with riffs that follow the riffing that is coming out of the guitars.

Rhythm guitars are all slow to mid paced avant-garde black metal riffs that utilize a lot of weird sounding distortion effects along with some clean playing that makes the music sound more psychedelic and exotic sounding that make the music more experimental while the lead guitars are very dark, melodic and depressive black metal guitar leads mixed in with some influences from other forms of music.

Vocals are mostly deep and grim sounding black metal screams with some occasional clean singing, while the lyrics cover Mysticism, Philosophy, Individualism as well as some Aliester Crowley type caballistic themes, as for the production it has a very dark tone without sounding too raw, primitive, over produced or under produced.

In my opinion this is another great album from Blut Aus Nord and if you are a fan of their previous releases, you will not be disappointed. RECOMMENDED TRACKS INCLUDE "Epitome VII" "Epitome X" and "Epitome XIII". RECOMMENDED BUY.

http://www.blutausnord.com
Posted by OccultBlackMetal at 12:01 PM