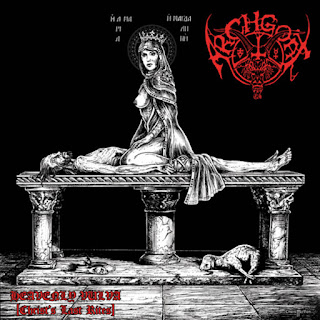 Archgoat are a band from Finland that has had their previous album reviewed in this zine that plays a mixture of black, goat and death metal and this is a review of their 2011 album "Heavenly Vulva(Christ's Last Rites)" which was released by Debember Morti Productions.

Drums range from slow, mid paced to fast drumming, while the bass playing has a very dark tone with riffs that follow the riffing that is coming out of the guitars.

Rhythm guitars range from slow, mid paced to fast black/goat/death metal riffs that are very raw and primitive sounding, while the lead guitars when they are utilized are very primitive and chaotic sounding black/death metal solos and leads

Vocals are mostly deep black/goat/death metal growls and vomits, while the lyrics cover Satanism, Occultism, Anti Christianity and Darkness, as for the production it has a very dark, raw and primitive sound to it.

In my opinion this is another great album from Archgoat and if you are a fan of this band, you will not be disappointed. RECOMMENDED TRACKS INCLUDE "Goddess Of The Abyss Of Graves" and "Passage To Millennial Darkness". RECOMMENDED BUY.