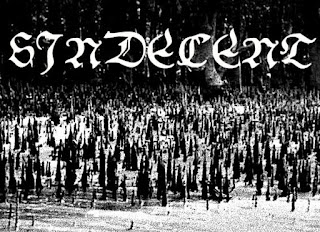 1. Can you tell us a little bit about the project for those that have never heard of you before?

Well, I will like to call it atmospheric, depressive and melodic black metal.

The lyrical theme is mostly based on death, depression, struggle, legends, mythology, dark fantasies and misanthrope.

Sindecent is a combined word which is named after the behavior of social disguise and hypocrisy which we named decent and practicing it for ages. This generates a lot of hate in me towards everyone and everything caused by us.

5. Currently there is only one member in the project, are you panning on expanding the line up in the future or do you choose to remain solo?

I never actually thought about this but things might change if it needs to be in future.

6. Can you tell us a little bit more about Akkrosh Records/

Akkrosh is an independent & non-commercial label for Black metal , Viking metal, Doom metal & DSBM. The first compilation album is coming out in this December called “Doomed In Depression” focused on dsbm’s and raw black metal. It’s the first Asian dsbm compilation album which is participated by black metal bands from Europe, America and Asia.

7. On a worldwide level how has the feedback been to your music by fans of depressive black metal?

Well, ‘Hearts Of Funeral’ got some thumbs up as a dsbm track. I have only one EP out there and some positive feedback so far.

8.Are there any other musical projects besides this one?

I have an experimental project focused on dark ambient electronic sounds.

Sindecent will stay black metal but I’ll probably try to add some folk sounds to introduce Baul in a very different way.

Rotting Christ, Bathory & Burzum have influenced me a lot towards Black Metal. I would also add Immortal, Agalloch, Lord Belial, Marduk, Xasthur, Forgotten tomb and Nocturnal Depression on the list. I have been listening to a lot of underground black metal recently for our upcoming compilation album. Bands like Cheerful Depression, Toorn & P.h.t.o are quite reknown among them. I am still stuck with Katatonia and Forgotten tomb latest albums along with good old Sargeist, Angantyr, Windir & Wedard.

11. Does Satanism or Occultism play any role in your music?

12. How would you describe the metal scene in your home country of Bangladesh?

Heavy Metal culture is quite established in Dhaka and still growing like a disease in other parts of the country. We have thousands of metal heads and loads of bad-ass bands making really good music. Black metal as always has a reputation of being isolated from the others and it’s not different here.

13. Outside of music what are some of your interests?

14. Any final words or thoughts before we wrap up this interview?

I would like to thank BlackMetalZine for this interview. Cheers!!


Posted by OccultBlackMetal at 1:39 PM