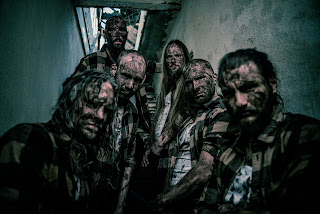 Simon: Much time passed until we finally finished mixing the album. After that we had to organize the video recording of the title track „Zerfall“. Besides this and a few promotional matters, we simply went on with our usual day lives. Family, working and whatnot.

2.In August you have a new album coming out, musically how does it differ from the stuff you have released in the past?

Simon: I think it is on the same path as „Mach dich frei“. But it simply could gain much more experience throughout the last few years – composing and production process made a big step forward. The song arrangements are way clearer now, no matter there are some progressive aspects or however you wanna call it. Within the music there is more variety now since we also use a wider source of sounds and instrumental elements – complex synth and orchestral arrangements, experimenting with effects and different guitars, trying new stuff with any kind of vocals. I'd say that „Zerfall“ tops our previous releases by far.

3.This is also your first full length since 2015, can you tell us a little bit more about what was going on during this time frame?

Olli: A lot of stuff happened on the personal side, marriages, a baby, job changes and so on. As a band we had some changes in regards to our second live guitar. Everything else is just the typical Finsterforst chaos, so nothing out of the ordinary happened to keep us from doing the album. It just takes time to make an album that sounds like Finsterforst without simply repeating what we´ve done in the past.

4.You refer to your music as being 'black forest metal', can you tell us a little bit more about this term?

Olli: Well, we don´t view ourselves as pagan, folk or even black metal, but you need some kind of brand so people can wrap their minds around what you do. Black forest metal does just that for us. The band derives from the black forest region, it is our source of inspiration and a lot of the lyrics are about nature while also using a lot of phrases you could find on black metal albums, so we thought that this would describe our music in the best possible way.

5.One of the tracks shows an influence lyrically from the works of Nietzsche, can you tell us a little bit more about your interest in his work and what are some of the other philosophers that have had an influence on your world view?

Olli: Most people so far thought of the bible, funny you realized the Nietzsche influence. Nietzsche is a big and very misunderstood philosopher who is way too often linked to national socialism because he phrased the word "Übermensch". But he did that way before anyone heard of Hitler and his following and meant nothing like this herd mentality that leads to fascism. His little poem "Ecce Homo" describes the potential brilliancy of the human species as well as our self-destruction tendencies and to this date it seems like one can only exist with the other. So the title felt fitting for a song that is just about that, humans following a seemingly greater idea and in the end they destroy themselves and the world as we know it. In terms of other philosophers I don´t really know. Maybe Rawls would fit in that category, but I´m more into sociology, reading the likes of Goffman or Bourdieu, so my biggest topic is social justice. It just so happens that we make music that doesn´t fit that style of lyrics.

6.What are some of the other lyrical topics and subjects you have explored over the years with your music?

Olli: I can´t really speak for Weltenkraft and ...zum Tode hin, since I wasn´t part of the band On Rastlos we tried to capture the thoughts of somebody who has to leave behind everything and get his act together in a new country or region In hindsight we kind of captured the whole migration topic three years before it really hit Germany. Mach Dich Frei was like being pissed and writing about it. It was about hate, personal freedom, not giving in to false authorities and so on. In the end there was the song Finsterforst which was more of a fantasy thing writing about the mighty forest in which everybody would die upon entering uninvited. After that we made the #YØLØ EP which was just about drinking and having fun with it With Zerfall we´re back on a more serious note, describing different layers of society and our planet as a whole falling apart because of us.


7.Can you tell us a little bit more about the artwork that is presented on the new album cover?

Simon: Again we worked together with Pär Oloffson who has done also some previous artworks for us. We explained him a bit about the album title and what we as a band would imagine. He came with this dark, sad, but also romantic and beautiful idea with this deceased couple that holds hand forever. We simply liked this idea and went with it. I think it is the best artwork we have had so far.

8.Out of all of the shows or tours the band has played over the years, which one stands out the most?

Olli: The obvious thing would be to say Wacken Open Air or the biggest tour so far with Equilibrium, Heidevolk and Nothgard. But the gig I actually enjoyed the most was the #YØLØ release gig. That was just a fun thing with a lot of friends and very loyal fans who actually got the EP and didn´t whine and complain that Finsterforst sold out.

Olli: There are some festivals planned for the rest of summer and autumn and a little tour with Skyforger, Enisum and Helsott in late October/early November. We are also in conversations about a really cool tour later in November which we can´t talk about right now. So watch out, we´ll definitely hit the road and maybe we´ll just be around the corner sooner than you think.

10.On a worldwide level how has the reaction been to your music by fans of black, pagan and folk metal?

Olli: I really can´t dissect between genre fans. But in general I feel pretty confident about the niche that Finsterforst have carved out for themselves over the years. We might have lost some fans with #YØLØ, but they should be back with us once they listen to Zerfall. I don´t think our music is meant to be mainstream, so I got no expectations to rise to a much bigger level. At the same time it would be awesome to take another mini step or two, so we might play on some main stages on bigger festivals and actually make enough money so we won´t have to bring our private money to make ends meet with the band. Other than that we´re good.

Olli: Up to Simon as he is the composer, but I´d like to just grow in an organic way. But you better believe it, if we ever feel like doing an EP that has nothing to do with normal Finsterforst we will do just that.

Simon: Haha, yes! If we would feel stupid again one day, then why not to have fun for ourselves and produce again some madness. But seriously, we will see what the future might bring. Right now I could only guess that we stay on that same road as we are right now with „Zerfall“ - simply big, wide, deep, dark, heavy, aggressive, sad and beautiful.

Simon: That's not really easy to answer today since I do not listen to much metal music anymore. But I was simply marked by certain atmospheric metal bands that have this feeling for wide music that needs its time to simply evolve and grow before you can entirely understand its whole picture. Nowadays, I'm listening to electronic music, haha. But still also to some metal, don't worry.

Olli: I actually like my normal job and I also have a family, so there isn´t too much time to spare with other stuff. So aside from Finsterforst I´m just a normal guy. I like to hang out with friends, have a beer, talk shit and relax.

Olli: You mean something like this: Listen to Zerfall and we´ll meet you on the road? No, we won´t do that cheesy stuff, sorry.

Posted by OccultBlackMetal at 11:57 PM