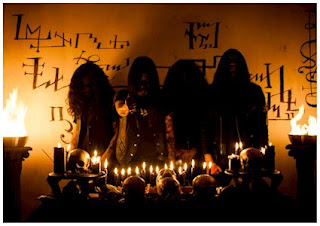 1.Can you give us an update on what has been going on with the band since the recording of the new album?
Before we finished the recording sessions we had a tour on Chile which was already being booked while we were setting the last details to the album. As soon as we completed everything we got on the road presenting the album songs over five cities in Chile. This was a challenge to us because this dates were Iniquiator’s A.D first appearances on stage. The audience and organization respond was great and so ours. After this tour we got some invitations to play on our city but unfortunately we declined because of some logistical issues with the organizers.
Currently we are creating new songs for the next releases and thinking about a proper presentation date for the album on Lima. Thing’s gonna happen.

2.In March you have your first full length coming, musically how does it differ from your previous demo's and ep's?
The first thing that people’s going to notice is about the sound which is more professional than the previous releases. We spent a lot of hours into the studio while mixing, selecting tracks, guiding the guests, etc. The next thing is the new vocalist who has a complete different range which we think it fits perfectly to the band, enhancing the music and atmosphere we reach through every song. You can say the band influences have been always the same but maybe on this album they are more notorious. Consider we are not talking only about metal references.
About the content, is the same phenomenon that happens on each one of our releases. The lyrics and the concept are the result of experiences and reflections on certain subjects which can get more abstracted or clearer to others. Some of you can recognize some imagery from different sources and get what I’m trying to say.


3.A lot of your lyrics cover Occultism, Black Magick and Philosophical themes, can you tell us a little bit more about your interest in the dark arts?
Black metal has to be real. This subjects are not supposed to be used with merely a shock value intention. Each one of us has his own way to achieve his own truth with different elements. The one we have in common is Arcada.

4.You also have a sigil in your band logo, can you tell us a little bit more about what this sigil means and how it is related to the bands name?
We used a common method to do the sigil which was using the band’s name and abstract it into a new image. The symbol can be understood in many ways as it is the language of interpretation and needs no translation. Just as the whole Arcada’s concept.

5.Can you tell us a little bit more about the artwork that is presented on the new album cover?
The process we had to define the final artwork was shared with the artist involved. As he participated as a guest on two lyrics, we talked before about the referents we had and based on those myths, the sketching process began. You can recognize some of the gnostic myth references along with some solar imagery too. The trifacial was a little detail from Jose Gabriel who has done his MA thesis out of this subject. The composition of the elements involved were influenced by an untitled anonymous illustration from 1588-1615 which has been given the name of Confesion de un Noble Indigena (The indigenous confession).


6.What are some of the best shows that the band has played so far and also how would you describe your stage performance?
I think the best show we had so far has been the one at Decimatio VII in Chile. We played along with Black Witchery, Sadistic Intent, Goatcraft, Malignant Asceticism and many other great bands from Chile. The audience was great and the backline too.
I would say our show its not supposed to be something to mosh with, as it’s not a “brutal” or “violent” type of metal. Some people have describe our performance as a contemplative or harsh experience.

7.Do you have any touring or show plans once the new album is released?
We haven’t got any tour confirmed yet but we already have some plans on mind. First we want to do a show in Lima to present the album on a proper way.

8.The new album is coming out on 'Edged Circle Productions', how did you get in contact with this label?
As we were about to finish the album recording, we began to post a lot of content on social media and the label noticed us. We got a mail and after they listened to the previous work we had released, we got the proposal of working together and we agreed. Everything so far have been great with them.

9.On a worldwide level how has the reaction been to your music by fans of black metal?
Usually people get surprised when they figure out we are from Peru because they usually expect a south american classic sound which we are not focused on. Most of the response we had over the years have been from outside our city (in fact, we have played more times outside Lima than in Lima itself) so I guess I can say we have some positive reactions.

10.What is going on with some of the other bands or musical projects these days that some of the band members are a part of?
Iniquiator and Ult have their own individual one man Black Metal projects called Iniquitatem and Ult respectively. You can find them on the label Visceribus Bestiae. Onryo and I have another side project called Voragine but our main focus is in Arcada. The remaining bands we participate on are only for supporting shows.

11.Where do you see the band heading into musically during the future?
We expect to release a lot of new material and adding some new ideas for the next shows. As things grow, the opportunities to do something completely different appear.


12.What are some of the bands or musical styles that have had an influence on your music and also what are you listening to nowadays?
Besides the notorious influence of the 90’s Black Metal bands we have, we listen to some post punk, new wave, folklore, etc. No need to name each band’s name. 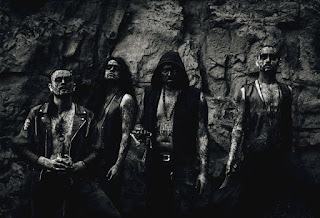 Posted by OccultBlackMetal at 1:19 AM