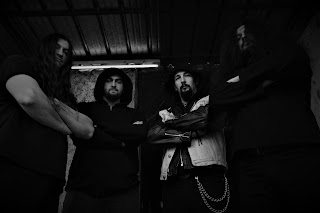 For those that have never heard of you before, can you tell us a little bit about the band?
Тhe band was formed in 2003 in a small town, called Radomir. The black metal wasn't popular there back then, but we wanted to have the band. In the first year of our existence we created a split album together with another Bulgarian band - Exile. The basic idea of Bolg was to be a very old school BM band with raw sound, but in the end we have found another path for our music.
In 2018 you had released your first full length album, musically how does it differ from your previous split and demo?
As far as we’re concerned, it is not much different from what we have released before. It is just that few members of the band changed trough the years, so therefore their own style was incorporated in the overall performance. The songs in the album differ in the feeling of speed. There are very fast songs, followed by some slower songs or songs the speedy parts of which is followed by slower melodic parts. It was the same in the split album. The general difference is that the sound is better and of course it should be, 15 years later ...
There was also no music being released in between 2004 and 2017, can you tell us a little bit more about what was going on during that time frame?
As we said, trough time several members of the band have changed. Some of us moved to another city, our vocalist Krum left Bulgaria for a while. Finally in the beginning of 2018 we released the full-length album. By the way the album was recorded in 2016, but we needed time to fix some small things and find a label.
Can you tell us a little bit more about the lyrical topics and subjects the band has explored so far with the music?
The lyrics are created by us and some friends. Our ex-basist Petar still writes sick lyrics for us, as well. The texts are in general in Bulgarian and sometimes in English.
The songs touch on historical, antihuman and antireligion topics. An interesting song is “Поквара” (means "Depravity"). It is a story about the brave crusaders going to set free the Holy Places, but before that they decide to attack Bulgaria and they are smashed by the Bulgarian army. A special "tool" has been used to win in the battle, one with hook at the end, preventing the opponent to retaliate once fallen on the ground.
Another interesting song is “Кървъв Идол” (means “Bloody idol”). There is a "tradition" called "Pig's weddding", which consists in butchering a pig and using it’s blood. It’s held before X-mass and in this period all the people are slaves to the bloody pig idol.
I know that the bands name means 'wolf' in Bulgarian, how does this name fir in with the musical style that you play?
There are many legends about the wolves. They are very strong and beautiful creatures, they bring the cold breath of the night , they work together or hunt alone, atack aggressively or stay quiet and sneak.
We try to make music wolf-alike - strong, fast and powerful, sometimes melodic and smashing slow.
Can you tell us a little bit more about the artwork that is presented on the new album cover?
The Artwork is work of our friend from Moonring Design, who created it for our first EP.
The religion is a plague, the Bolg’s album is the plague vaccine, that’s the idea of the cover pictures.
What are some of the best shows that the band has played over the years and also how would you describe your stage performance?
Maybe our best show was in the Bulgarian town Dimitrovgrad - it's THE "Mecca" of this horrible music called Pop-Folk. We played in a small Black/Death festival in an underground club, where the stage was in a cage of chains. We have been playing inside the cage, while people were climbing up the chains arround us. At one point, we realized that the cage is just to be demolished.
Do you have any touring or show plans for the future?
For now we don't have plans for touring outside Bulgaria.
If you want to see us playng, come to Sofia, Bulgaria. On 7th of March 2020 we are playing with the greek band Nihilism. Bolg will also play on “Broken Silence Black Death Metal Fest” 2020 together with Horna, Mork, Kawir, Liquid Graveyard and more, so we will be expecting you on the BLACKsee coast.

On a worldwide level how has the reaction been to your music by fans of black metal?
We've heard good words for "Plague Vaccine" from different people around the world. We want to believe, that people like us, especially when we are on the stage. In general, we think the reaction of our music is good.
What is going on with some of the other bands or musical projects these days that some of the band members are a part of?
The vocalist Krum and the drummer Kamael are playing only in Bolg. Our guitarist – Asen, has his own project Древна (Drevna), so these days he is preparing the second album of the band.
A. Catacombs (bassist) is involved in three other bands - Mass Grave, Axecutor and Plague.
When can we expect newer music and also where do you see the band heading into musically during the future?
We are working on new songs and new cover songs now, we hope to release new EP or album this year. We will keep doing speed and  powerful black metal… till death.
What are some of the bands or musical styles that have had an influence on your music and also what are you listening to nowadays?
Of course, we like the old black metal bands - Emperor, Dissection, Marduk, Mayhem, Darkthrone, Beherit, Satyricon. They gave us the path of our music. Furthermore, we like different metal styles as death, doom, trash, grind, as well.

Before we wrap up this interview, do you have any final words or thoughts?
Come see us on the stage. Support black metal and support your local bands. Cheers and Horns up!!!