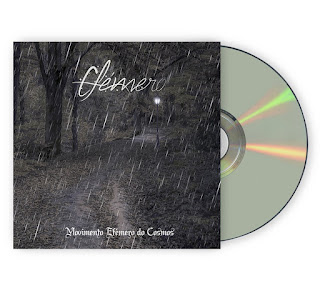 A: In 2017 I had some ideas that didn't fit into this new era of Forgotten Winter, both musically and lyrically, it could fit if we still played symphonic black metal, so instead of let them go waste I built a base around them and developed the songs. Thus Efémero was born.
Some of the Efémero's songs are spiritual sucessors of Forgotten Winter's "Chuva" and "Chuva II", so if you liked those you might want to give "Movimento Efémero do Cosmos" a shot.


2.You have your first album coming out in March, can you tell us a little bit more about the musical style you went for on the recording?

A: There were some guide lines I knew I wanted to follow, heavy keyboard driven music with emphasis on pianos, simple and slow melodies the evoke a somewhat feeling of melancholia and nostalgia.
Apart from that things just flowed without anything specific on mind, some stuff was improvised on the recording, for example the lead guitar on Geosmina, the lead pianos on Desvanecer, the arpeggiator on Antártica and a couple more, some other stuff was changed as I recorded, so it was shapped as it went, nothing was set on stone from the beginning.
On the mix aspect I asked the producer to set guitars on the back in order from them not to draw much attention.
It might have begun with some musical style on mind while I composed, namely symphonic or atmospheric black metal, but it quickly changed to "lets see where this is going" kind of setting.


3.What are some of the lyrical topics and subjects you have explored so far with your music?

A:Each song has different topic.
Desvanecer is about the feeling of being eager to die, and rejoicing about it, in order to get a whole new set of experiences.
雨女 is not about the yokai from japanese mythology as the title suggest, it is about the rain "caressing" a dying man and giving him comfort as he passes away, thus rain is portraited, metaphorically, as a woman.
Geosmina is a nature song about how petrichor covers the smell of rotting corpses on a humanless earth, the last triumph of nature above mankind.
The topic of Antártica is about being forgotten, it is the ultimate death that all things go through, it is based on a quote by an anime series called Serial Experiments Lain "If you're not remembered, then you never existed", I think Antarctica is a good metaphor for being forgotten.


4.What is the meaning and inspiration behind the name 'Efermero'?

A: Efémero (Ephemeral in english) means something that lasts only a short time. The bands name was supposed to be the same as the title of the album "Movimento Efémero do Cosmos" (Ephemeral Movement of Cosmos), movement representing life, meaning something like - all life lasts only a short period of time - later it was decided that this name was too long, so it was changed to Efémero, that has a similar meaning.


5.Can you tell us a little bit more about the artwork that is presented on the album cover?

A: This album is the most personal stuff I ever wrote musically speaking, I wanted to cover to also reflect that. The cover represents a memory I cherish about when I was a child, I lived far from school and we had no car whatsoever, so we had to walk from home to school and vice versa. In the autumn, when we walked from school to home the landscape was similar to the cover on the album, low light and raining, dry leaves on the ground, few and far between lamps on the way, hence why I composed that cover.
So it doesn't mean much nor it as a secret meaning, it's just a memory of mine.


6.With this project you record everything by yourself, are you open to working with other musicians or do you prefer to work solo?

A:The future is unknown but as of now I don't know if I will release some more stuff with Efémero and If I do what kind of music will it be.
But I can tell you that the reason this album took so long to be made (2017 - 2020) was that I had some problems gear wise, I considered releasing the album without guitars, similar to Profanum but the comopositions didn't allowed it, later I spoke to some people to record the guitars but that didn't went through, so later I recorded the guitars.
All this to say that in the composition aspect on Efémero, I prefer to do it all by myself, like I said it is a personal project but recording on the other hand - nothing is off the table.


7.The new album is coming out on 'Loudriver Records', can you tell us a little bit more about this label?

A: Loudriver Records is our label (J.Fausto and mine), it is a subsidiary of a J. Fausto label called Slowdriver Productions. It was a label created to release our projects (Forgotten Winter, Omitir, Efémero) since we prefer to do it all by ourselves, labels we worked with ended up failing one way or the other, this way if it fails we can only blame ourselves.
Loudriver Records was firstly a label for all styles of metal but we have chosen to focus on Atmospheric/Ambient/Symphonic Black Metal now. We focus on digital releases but we always end up doing some limited editions of physical copies.


8.On a worldwide level how has the reaction been to your music by fans of black metal?

A: We just began the promotion, in fact your zine was the first one to review the album. It is too soon to have a good answer for that, the few people that gave feedback gave a really positive one. Let's see...


9.Where do you see yourself heading into as a musician during the future?

A: I think all musicians are always evolving, I mean when I look at my first works I'm kind of embarrassed, I can only hope that in the future to be embarrassed to listen at "Movimento Efémero do Cosmos" too.
In the short term future I'm now working with Trovador (J. Fausto) on the new Forgotten Winter's album, that is the main focus right now, to release an album a step above "Vinda".


10.What are some of the bands or musical styles that have had an influence on your music and also what are you listening to nowadays?

A: When "Efémero" was created I mainly listen to doom metal, I think some of that drained into the album, particularly on the first track. But I listen to a ton of different stuff however mainly metal and rock.
Some stuff I've been listening in the last weeks/months has been Angellore - "Rien Ne Devait Mourir", Band-Maid - "World Domination", Skyforest - "A new dawn" and all Summoning influenced bands that are released like Belore and Forlorn Citadel, to name a few.


11.What are some of your non musical interests?

A: Reading horror, fantasy, paranormal and some new age'ish stuff.
Seeing some anime, in fact I tend to follow like five series each season.
Playing games, I've been playing Ori as of late, stunning visuals there.
Laying down just thinking about what comes to mind is also a favorite hobby of mine.

A: Thanks you for the interview and support. Stay tuned on the coming weeks to listen to the album in its entirety. The album will get released on 20 March so visit efemero.bandcamp.com . Thanks!
Posted by OccultBlackMetal at 11:38 AM