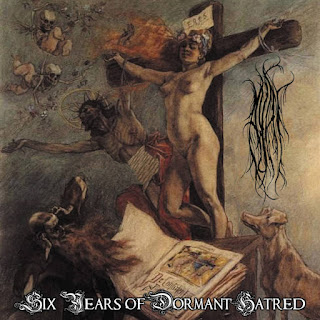 Ayat are a band from Lebanon that have also been interviewed by this zine and I will add that  they did have a friendly attitude towards the zine, they have a music style that I would describe as being raw black metal with a punk and industrial edge and this is a review of their 2008 album "Six Years Of Dormant Hatred" which was released by Moribund Records.

Drums are mostly mid paced to fast with a lot of brutal blast beats, while the bass playing has a dark tone with riffs that follow the riffing that is coming out of the guitars and at times they have a sound of their own and dominate some of the songs.

Rhythm guitars are mostly mid paced to fast raw black metal riffs that also have influences from punk and thrash and a slow doomy riff being used on the last song, while the lead guitars when they are utilized are mostly chaotic sounding guitar solos.

Vocals are mostly high pitched black metal screams with some deep growling and clean singing male and female vocals being used at times mixed in with some industrial style screams, while the lyrics cover anti-Islam, perversity, murder, suicide, and hatred for humankind, as for the production on this recording it sounds very dark, raw and heavy.

In my opinion while Ayat where not too friendly in the interview they still produce great raw black metal with a punk/thrash edge and if you are a fan of bands that play that kind of style you should enjoy this album. RECOMMENDED TRACKS INCLUDE "Fornication And Murder" "Collective Suicide In The Bouldoir(Feeling Wonderful Tonight)" "Curses! Curses! And Never Sleep" and "Thousand OF Pissed Motherfuckers". RECOMMENDED BUY.

iTunes
Posted by OccultBlackMetal at 4:55 PM