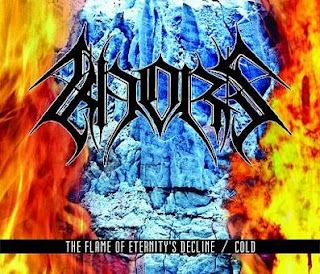 Khors are a band from Ukraine that plays an atmospheric form of pagan/black metal and this is a review of their albums "The Flame Of Eternity's Decline" and "Cold" which where re-issued by Paragon Records during the year 2010.

Drums alternate between mid paced to fast playing with a lot of blast beats, while the keyboards have a very  dark, medieval and atmospheric sound to them mixed in with some sorrowful melodies, as for the bass playing it has a dark tone which follows the riffs that are coming out of the guitars.

Rhythm guitars are mostly mid paced to fast black metal riffs and at times they have a thrash feel to them, while the lead guitars are very chaotic sounding black metal guitar solos with some melodic viking metal soloing.

Vocals are high pitched black metal screams, while the lyrics cover paganism as well as some other dark themes, as for the production it has a very dark feel going on with it.

In my opinion while Khors are not the most original band I have ever heard they still play quality atmospheric pagan/black metal and should appeal to most fans of this genre. RECOMMENDED TRACKS INCLUDE "Eyes Of Eternal Loneliness" "Spirit Of Fury" "Ashes" and "In The Depths Of Black Hills". RECOMMENDED BUY.

http://www.myspace.com/kozeljnik
Posted by OccultBlackMetal at 9:53 PM