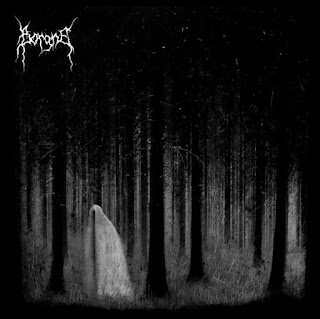 Borgne are a band from from Sweden that plays a very depressing form of ambient/industrial black metal and this is a review of their 2010 album "Entraves_de-I'Ame" which was released by Sepulchral Productions.

Drums alternate between slow, mid paced to fast drumming with a lot of blast beats, while the synths and programming sounds very dark, epic sounding and depressive with some weird ambient noise effects being used at times mixed in with some militant industrial style programming, as for the bass playing it has a very dark tone which follows the riffing that is coming out of the guitars.

Rhythm guitars combine slow, mid paced, to fast raw ambient/black metal riffs that are very depressive and dark with some of the atmosphere evoking a Swedish style black metal sound, while the lead guitars are very depressing sounding black metal leads that contain some melodies at times, as for the acoustic guitars they add a great amount of tragedy and sorrowfulness to the music.

Vocals are mostly high pitched black metal screams with some deep growls thrown in at times, while the lyrics touch on misanthropy, death and other dark and depressing themes, as for the production it sounds very dark and raw with the feel of a black and white horror film.

In my opinion Borgne are a very good band that has a sound that is more powerful and professional than most bands that go for a depressive ambient/industrial black approach, if you are a fan of that genre, you should check out this band. RECOMMENDED TRACKS INCLUDE "Die Trying To Take Off The Rope" "Suffering To Buy Our Poison" and "The Plague". RECOMMENDED BUY.

http://www.myspace.com/borgne
Posted by OccultBlackMetal at 12:56 PM