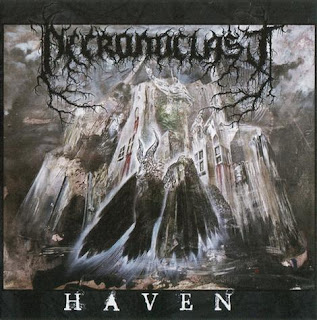 Necronoclast are a band from Scotland that plays a very suicidal form of black metal that also takes a lot of influences from doom metal, who also by the way have been interviewed by this zine, and this is a review of their 2008 album "Haven" which was released by Moribund Records.

Drums alternate between slow, mid paced to fast playing with some blast beats, while the synths when they are utilized bring a very dark edge to the music, as for the bass playing it has a very dark tone which follows the riffs that are coming out of the guitars.

Rhythm guitars combine raw black metal with doom metal mixed in with a good amount of melody and an occasional thrashy edge, while the lead guitars are very melodic and depressive sounding guitar solos that mix black and doom metal together, as for the acoustic guitars when they are used they utilize a lot of finger picking to give the music a much more dark sound.

Vocals are mostly high pitched black metal screams with some deep growls being used at times, while the lyrics dark and depressive topics, as for the production on this recording which was recorded between August 2007 to July 2008 sounds very dark while retaining a very professional feel.

In my opinion Necronoclast are a very good band that should appeal to someone that is looking for a band that combines suicidal black metal together with melodic doom meta. RECOMMENDED TRACKS INCLUDE "That Which Crawls Among The Shadows" "Entombed In Silence Above" and "Slashed By Shards Of Existence". RECOMMENDED BUY.

https://www.metal-archives.com/bands/Necronoclast/38175
Posted by OccultBlackMetal at 9:46 PM