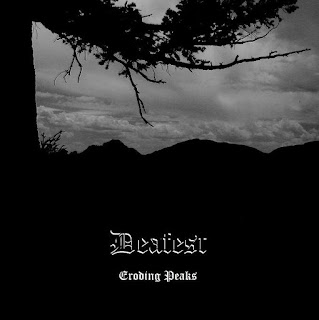 Deafest are a band from Littleton, Colorado that has been interviewed and all has had music that been reviewed in this zine who also play play a nature orientated form of black metal and this is a review of their 2009 album "Eroding Peaks".

Drums alternate between slow, mid paced to fast drumming with some blast beats being thrown in at times, while the bass playing has a dark tone which follows the riffing that is coming out of the guitars with a great amount of power.

Rhythm guitars are a mixture of slow, mid paced to fast raw ambient black metal riffs that also have a shoegaze feel to them and some slower soft playing, while the lead guitars when they are utilized are very primal sounding ambient black metal guitar solos with a small amount of melody, as for the classical guitars when they are utilized they bring a dark and emotional atmosphere to the music.

Just like with the new release, this album also contains no vocals making the music purely instrumental, while the themes of the music concentrate on nature, as for the production it sounds very dark and raw.

In my opinion this was another good release from Deafest and if you enjoy nature orientated black metal you should give this album a listen. RECOMMENDED TRACKS INCLUDE "Where Gnarled Bark Still Stands" and "Continental Divide". RECOMMENDED BUY.