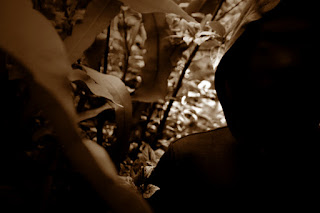 Glora Nexus is my own project. Glora Nexus meant to be minimalistic and unpredictable. After doing some experiment, Glora Nexus focused on the Black Metal sound, as it was where our hearts lay. The major challenge I guess is to make something characteristic in a black metal genre that has been very much explored already.

2.So far you have released an ep, can you tell us a little bit more about the musical style that you went for on the recording?

In terms of genre, Death Metal and Black Metal had on me. Being nihilistic was the inspiration behind the themes and attitude in my approach to black metal. There was never any attempt to swing our style from one influence towards another. Merely to migrate towards our own sound. I can’t speak for anyone else but myself, but for me, it’s just an urge to express oneself through music. but it certainly makes ideas pop up easier.

3.What are some of the lyrical topics and subjects you have explored so far with the music?

My influences remain the same really through all these years. I was always fascinated by philosophy and literature.  basically, I grew up with the Heavy Metal that many metal fans will come to recognize. Since my twenties, I started to develop an interest in philosophy and literature with a existential dimension to it (Kierkegaard, Kant, Baudrillard, M. Ponty, Paul Tillich, Sartre, Camus, Dostoyevsky and F.H. Jacobi, Richard Rorty for example) and started reading voraciously on both disciplines. On a personal level, I do find value in other people, I share some of his misanthropic and asociality attitude towards humanity. I find non-musical inspiration from points of view, the interpretative and renewing process and history. Some easily noticeable traces of these are visible in the lyrical concepts of Glora Nexus, Some experiences of everyday life do influence song-writing.

4.What is the meaning and inspiration behind the name 'Glora Nexus'?

Glora Nexus is not a “real” word so its meaning is more in the feel of it than an actual description. I think of it as something that lies hidden not yet revealed. I decided upon the name thinking about the concept of Man combines influences from melodic black metal, nihilism, and the energetic melodies of traditional musical instruments to develop strong themes.

The first way to reject the existential condition is to claim Illustration of Erebos can reply that she is giving depicted only which ties into the lyrics. I believe that darkness, existentialism, and art will always be. I hold those words closely till today. The cover art was made by our good friend Johnny Prayogi (https://www.facebook.com/johnyprayogiart/).

6.With the exception of a few session musicians you work mostly as a solo project, are you open to working with a full band?

I never had any plans to make the Glora Nexus work with a full band.

7.On the new ep you also have a few quests, can you tell us a little bit more about who they are and also their contradictions to the recording?

The world today is more boring than ever, people overcome themselves with each passing day. I found more individuals have a possibility to find something great by their selves regardless of their connections. Guest musicians such as Ragnar Sverrisson (Helfro), Teguh Permana (Tarawangsawelas), Lexy Alexander (Blodwen), and Ardian Nuril Anwar (Devoured) are some of the musicians with the capacity I want to give a musical style. Fortunate to work with dedicated people and contribute to the scenes I love.

8.The ep was released through both 'Bhumidhuka' and 'Harsh Productions', can you tell us a little bit more about these labels?

Not many words, The music itself carries a spirit, yes, but where different fits into the music, is an answer best put to someone else. I can only speak for what I and Bhumidhuka Productions and Harsh Productions did together. these two labels are real manifestations of the DIY spirit that still exists today. I have to thank the two label owners who have made this physical release possible to spread to several regions in Indonesia and in several countries.

So far, I have received a positive response, thanks to all who bought so far and for the support.

10.When can we expect a full length and also where do you see yourself heading into as a musician during the future?

I had no idea where the journey would take us and we are pleased with our results regarding this “EP” proposal. Metal is overtly realistic in its outlook, thus it transcends mere politics. Underground metal is an honest form of music and a way to express yourself. Not the crap you stumble across every day. I also do admire bands that have been around since the beginning.  I think friends, as well as other acquaintances, have been quite supportive. I don’t speak much of my views or interests with my listener though, I’m not really interested if they support them or not.

11.What are some of the bands or musical styles that have had an influence on  your music and also what are you listening to nowadays?

I listen to a lot of black/death bands from Sweden, Greece, Icelandic, Poland and Germany.

Life is war choose your side, stand for the underground.