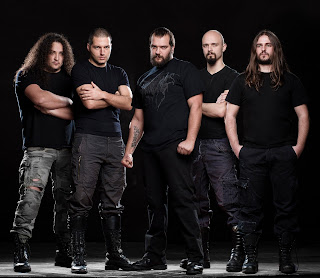 We are fully involved in the promotion of “Second Coming”. Thanks to the great work of our label we are receiving many review and interview. We are also planning some live shows for promoting the release the best we can

2. How would you describe the musical sound of the new album and how it differs from previous releases?

“Second Coming” is a mix between Black and Death Metal, with modern influences and more black’n’roll or “avant-garde” parts. I think you can easily say that it’s a Black/Death metal album but if you listen to it carefully you will identify a lot of different influences in our songs. The major difference between “Second Coming” and our previous releases is the more modern and in your face attitude. We tried to create songs that would have not lost anything about the aggression and impact we can offer during our live shows, and I think we did it.

3. What are some of the lyrical topics and subjects the band explores with the new album?

We are continuing to explore the situation around human being. We started our concept with our first album, “Human Primordial Instinct”, we kept exploring it in “Late” and now we are here again with the last album.
The difference between “Second Coming” and our previous release is that now our Lyrics are more “positive”, there is space for humans to save themselves from their own trap. There is nothing about religion or Satanism here, just an anthropological point of view of what’s happening us every day.

4. What is the meaning and inspiration behind the bands name?
Dissimulate – transform - change

5. What are some of the best shows that the band has played so far and how would you describe your stage performance?

We had the honour to play with many important bands such as Keep of Kalessin, Rotting Christ, Entombed, Vader, Marduk and so on. We also participated to some festivals with bands like Dimmu Borgir or Opeth. I’d like to mention you our UK tour with Keep of Kalessin as the best experience we had. We stayed 10 days touring the UK in the tour bus, just playing and drinking, and than playing and drinking again!
About our live shows, we base our performance on aggression, especially now that we are not using face painting anymore.

6. Do you have any touring plans for the new release?
We just booked some gigs all around Italy at the moment, but we are working hardly for take part to some big tour around Europe. We will have updates soon, I hope!

7.Currently you are singed to My Kingdom Music, how did you get in contact with this label and how would you describe the support that they have given you so far?

We know Francesco’s work from years and we are happy to can collaborate with his label. When I sent him our stuff he was enthusiastic and willing to start working together. We are getting many reviews and interviews till now, so I’m more than happy about our choice.

8. On a worldwide level how has your newer material been received by fans of black and extreme metal?

We are just at the first step of the promotion, but I can say that we have two kind of general feedback: you like the modern influences we added to our sound or you do not. I must say that generally speaking who liked “Late” criticized these influences and who did not know us really liked them! I think is strange that more than one people wrote that we have an excessive use of techno parts, when we just used them in a couple of riffs on just one song! But you know, we are receiving really positive feedback in general and most important we are more than happy about our work .

We really don’t know. After “Late” we had no idea about our next release and now we are not using face painting anymore, we added many modern and different influences but we are still playing extreme black/death metal. We will keep doing it for sure, just we will contaminate our music in the way we will be inspired to do.

As I told you, we have been mostly inspired from Norvegian Black Metal, U.S. Death Metal and also from some Italian acts like Aborym, Ephel Duath and Maldoror. My personal favourite band will be a mix between Darkthrone, Dodheimsgard and Vader! About my actual listening, I do not listen to many new bands by the way.

11. Does Satanism or Occultism play any role in your music?

We have never talked about Satanism or any other kind of religion in our music. We have an “anthropologic” point of view, evaluating evident facts and not metapysical doctrines when we write our lyrics and in general during our life. Talking about me, I do not follow any religion, neither Satanism. I just dedicate all my time and resources to my family, my job and my band and I try to treat people in the same way they treat me.

12.Outside of music what are some of your interests?

We have no time for interests apart from our music! We all have jobs and families to think about! Talking about me, as Behavior Analyst I’m interested in human behaviour and the application of basic principles of behaviour in the society.

13. Any final words or thoughts before we wrap up this interview?
We really thank you for you support, we appreciate it! We invite all of you to listen to our music, you won’t be disappointed. 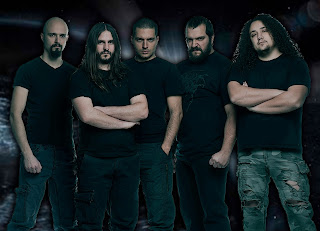