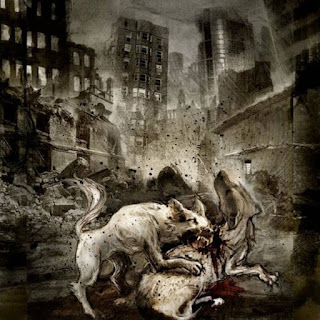 Nesseria are a band from France  that played a very raw and primitive form of black metal on this recording mixed in with some crustcore and sludge and this is a review of their self titled 2010 album which was released by Throatruiner Records.

Drums range from slow, mid paced to fast drumming with a good amount of blast beats being thrown into the music, while the bass playing has a very dark tone with riffs that follow the riffing that is coming out of the guitars and at times they have a very powerful sound to them.

Rhythm guitars range from slow, mid paced to fast black metal riffs that are very raw and primitive sounding mixed in with some influences from crustcore and sludge with some songs being hardcore influenced while the lead guitars when they are utilized briefly have a death metal feeling to the leads without turning into guitar solos.

Vocals are all high pitched black metal screams with a brief spoken word passage on the last song, while the lyrics are written in French with themes that cover darkness and hatred, as for the production it has a very heavy, dark, raw and primitive sound to it.

In my opinion Nesseria play a decent form of raw and primitive black metal mixed in with some sludge and crust influenced and the only complaint I have about the recording is some of the hardcore ridding other than that, this is a good album and if you are a fan of this style, you should c heck out this recording. RECOMMENDED TRACKS INCLUDE "A Ceux Qui Nous Ont Lâchés" "Arkhangelsk" "Pyramide" and "Les Filles De Dieu". RECOMMENDED BUY.

Posted by OccultBlackMetal at 2:59 PM