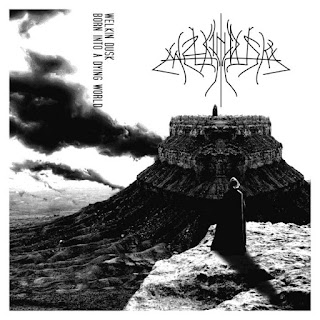 Welkin Dusk are a band I recently reviewed a demo from with a style that mixes raw and primitive sounding black metal with crustcore and this is a review of their self released 2011 cassette "Born Into A Dying World".

Drums range from slow, mid paced to fast drumming with a great amount of blast beats being thrown into the music, while the bass playing is a little bit more mixed down on this recording with riffs that follow the riffing that is coming out of the guitars and on certain songs they sound very powerful.

Rhythm guitars range from slow, mid paced to fast raw and primitive sounding black metal riffs mixed in with some dark sounding melodies while still retaining some of the crustcore influences from their first demo and there are little to no guitar solos or leads present on this recording with maybe a couple of punk rock style leads being used on one song briefly.

Vocals are mostly high pitched black metal screams mixed in with some crustcore style growls and shouts, while the lyrics cover hateful themes, as for the production it has a very dark, raw and primitive sound to it.

In my opinion this is another great release from Welkin Dusk and if you where a fan of their previous recording you will enjoy this one as well, in addition there are some re-recorded songs from that demo. RECOMMENDED TRACKS INCLUDE "Buried Deep In My Hate" "All That Sacred is A Lie" and "Gasping". RECOMMENDED BUY.

Posted by OccultBlackMetal at 5:30 PM