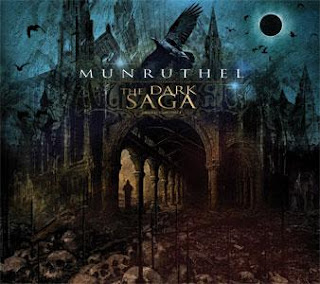 Munruthel are a 1 man band from Ukraine whose member is a well known musician in the black metal scene there that has over the years with his project has recorded black metal albums and dark ambient albums under the name Munthrel and with this recording goes for more of an epic dark ambient soundtrack movies for video games and this is a review of their 2011 album "The Dark Saga" which was released by Blazing Productions.

Classical guitars use finger picking to enhance the darkness of the music and there is no singing or vocals on this recording except for maybe a few chants with most of the music being instrumental.

The concept of the music revolves around the "Gothic II: Dark Saga Addon" video game, as for the production it has a very strong, powerful and professional sound to it.

In my opinion while the more close minded black metal fans of their previous album might not enjoy this I still feel that this is a very great epic sounding dark ambient/classical album and if you are a fan of this style, you should check out this recording. RECOMMENDED TRACKS INCLUDE "The Thick Wood" "The Huntsmen Camp" "The Ork's Lair" and "The Ancients Ruin". RECOMMENDED BUY.

Posted by OccultBlackMetal at 11:26 AM