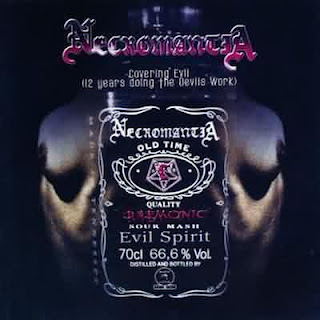 Necromantia are a band from Greece that has been around for more than 20 years that plays a very atmospheric form of satanic/occult black metal and this is a review of their 2001 compilation album Covering Evil(12 Years Doing The Devil's Work)" which was released by Black Lotus Records.

Drums range from slow, mid paced to fast drumming with a good amount of blast beats being thrown into the music, while the keyboards bring a very dark and atmospheric sound to the music with some piano parts that bring an avant garde feeling to the music, as for the bass playing it is the main instrument on the recording with a  lot of skillful sounding bass leads that are very heavy and dark sounding hellenic black metal riffs that also utilize traditional metal influences with some 8 string bass guitar being thrown in as well and at times there are some progressive style playing and on one song they borrow a riff from classical music.

There are no rhythm guitars present on this recording, while the lead guitars are very dark and melodic sounding hellenic black metal guitar solos and leads that also mix in alot of classic metal influences, as for the classical guitars when they are utilized briefly they use finger picking to bring a medieval feeling to the music.

Vocals are mostly high pitched black metal screams mixed in with some clean singing chanting and a brief use of spoken word ritualistic passages, while the lyrics cover Satanism, Occultism, Anti Christian, Hellenic Mythology, Eternal Damnation, and Sacrilege, as for the production it has a very strong, powerful, heavy and professional sound to it.

In my opinion this is a great compilation album from Necromantia and if you are a fan of this band, you probably already own this recording. RECOMMENDED TRACKS INCLUDE "The Number Of The Beast" which is an Iron Maiden cover "Demon's Whip" which is a Manowar cover "Ancient Pride" and "Les Litanies de Satan". RECOMMENDED BUY.

Posted by OccultBlackMetal at 6:34 PM