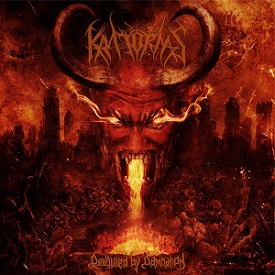 Kratornas  creates  another  recording  that  takes  bestial  black  and  war  metal  and  mixes  it  in  with  some  death  metal  and  grindcore  elements  to  create  a  very  brutal  sounding  album,  the  production  sounds  very  powerful  while  the  lyrics  cover  Satanism  and  Blasphemous  themes.

https://www.youtube.com/watch?v=3ZMalwP_TlQ
Posted by OccultBlackMetal at 8:08 PM