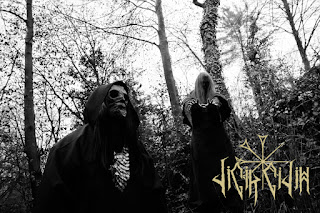 1.For those that have never heard of you before, can you tell us a little bit about the band?
Utanapistim:
Everything that's important and necessary to know on our album, can be known through concept and music. Nothing else matters.

2.Recently you have released an album, how would you describe the musical sound that is presented on the recording?
Utanapistim:
It's not up to us to define ourselves, but consider we are often being asked rather than questioning on other more interesting issues, I can say we have several influences. Our approach in composing follows the concept expressed but at the same time it's totally instinctive, stating what the concept wants to express. Without loosing too much time I can simply resume it with two apparently superficial adjectives, that are not in reality: it's occult and primordial. The perception is Chaos.

3.You refer to your music as 'occult avant garde black metal', can you tell us a little bit more about this term?
Utanapistim:
Not because we personally feel the need, but actually since unfortunately everything needs to be classified and many are lost without having a guide or a category, we have tried to use terms that
are mostly closed to our proposal. It's a fact that our occult and technical stylistical approach used to express our ritual is influenced predominately by black metal, but it's also true that our album has influences not purely raw black metal and in some passages not even metal. Also the most appropriate term is Avantgarde, considering dissonances and some other aspects we have been influenced by. We don't care to be classified, we just care about the messagethat has to be spread.

4.The band has been around since 2014 but waited until 2017 to release an album, what was going on during the first 3 years?
Utanapistim:
We worked on arranging and recording during these 3 years with the calm needed to propose a concept, which had to be coherent, to propose music with no compromises and to render everything the most primordial and instinctive as possible. We are not in a hurry, because we think that every kind of pressure, even external, can compromise the writing of an album. We just took the time needed.

5.The lyrics deal a lot with ancient Mesopotamia and Esoteric Doctrines, can you tell us a little bit more about your interest in these topics?
Utanapistim:
Lalartu took admirably care of lyrics, being able to conceive the entire concept as a poem; expressing our common thought not purely as notional but also as conceptual and occult content coherently and
suitably. These themes have not been chosen, they’ve just been processed naturally. We didn’t get close to the topic only for using it in our music, but we took the passion we have for the ancient Mesopotamic culture turning into something intimate and deep and experienced as a new personal doctrine. Mesopotamic civilizations together with their culture, brilliance, history and occultism express perfectly the concept of neutrality, the return to the primordial stage and fit entirely with our occult and philosophical concepts. It’s not marketing, but a philosophical way of life from which
descends also the “anti-ego” choice of not divulging nationality and faces. We know well that proposing our music to the audience can create conflicts, but we didn’t act for the trend of the moment or for glory, but just for awareness and coherence of the message and themes that we
divulge and only people interested to catch them will get. I think I’ve been enough exaustive talking about our choice, whilst for the historical aspects is too reductive to answer in this contest

6.What is the meaning and inspiration behind the name 'Digir Gidim'?
Utanapistim:
Find band's moniker hasn't been so arduous, 'cause what we clearly defined even before the project itself it has been the entire concept. It puts together name, music, lyrics, graphic, lack of identity and
nationality, entirely congruent with what the concept is. Our official explanation of what the moniker means, it's just one. Digir is a cuneiform determinative, used to indicate the deity.It wasn't pronounced, and it could be transliterated with a simple D in the top left, beside the name of the God/Goddess. Taken as a standalone term it also could indicate the God Anu, or also the sky, so it's a symbol which and it's devoid of any pronunciation, of any sense of Ego, yet inordinately loaded and important Which contemplates elevation through the return to the primordial essence. Nullifying the Ego which is polluted by civilization, empyrical doctrines, limited ideas of religion. Modern religions tend to distort the sacred scriptures for the sake of limiting the scope of beliefs and turning them into
slavery. The most ancient civilization, the Sumerian/Mesopotamian one, holds the potential to return to this principle which was uncorrupted before other cultures, to achieve self-determination through a series of stages, arriving beyond the good/evil dychotomy as it was conceived by successive religions, all of this in the presence of the Gods and the God within us, a ghostly God which is dimmed by human stupidity.The association with the word "Gidim", which means actually ghost, is
perhaps clear at this point.

7.Currently there are only 2 members in the band, are you planning on expanding the line up in the future or do you chose to remain a duo?
Utanapistim
There is no possibility for this project to become a freakshow. There is no plans for lives not even for including external members. The only way to reach our message and intimacy is to listen our music.
Lalartu and I are the only entities which belong to Digir Gidim. Further members or external people would break the required equilibrium, polluting the very same project. We won’t allow!

8.The band is from an unknown location, are you planning on revealing the location in the future?
Utanapistim:
Our purpose is to never reveal; but with internet and the exposure even if minimal and constantly monitored by both, it may this happens. We’ll try our best not to. There's been a lot of arguing about our native land. To reach a neutral awareness, it's necessary to completely detach from society, to avoid its polluting effects. Digir Gidim have no boundaries, no nationality, no group identity to taint
our physical and spiritual dimensions. Faceless, Digir Gidim stay within the non-existing in order to exist. No matter what role human experiences and pre-judicial relationships may have assigned you
within society. The goal is to find our true self and, together with it, our true liberation.

9.On a worldwide level how has the feedback been to your music by fansof black metal?
Utanapistim:
We are not interested.

10.What is going on with 'Titaan' these days?
Utanapistim:
I admire and respect Titaan, I consider the project of great value. Lalartu is member both of Digir Gidim and Titaan, but Titaan is hismost intimate and exclusive project besides Digir Gidim. Both projects share a lot in the way of seeing, but we would also point out that in the same way they are two different and separate entities. One is not the evolution of the other, but they are distinct and diverse. If something it’s needed to be known about Titaan, we think it should be asked another time. We’ve decided not to answer on questions about Titaan when talking about Digir Gidim. If someone wants to know something more about Titaan can directly ask to Lalartu through appropriate questions regarding only his project.

11.Where do you see the band heading into musically during the future?
Utanapistim:
You never know what the future holds. Only be based on present built on past. The desire is almost certain to release a second and maybe even a third album. The only truth that we know is that 'till when we feel the need to express ourselves we'll do it without compromises

12.What are some of the bands or musical styles that have had an influence on your music and also what are you listening to nowadays?
Utanapistim:
The entire 90’s black metal has deeply influenced our music, as well as 70’s, rock, post rock, shoegaze and much more, even music coming from other ages. Our musical background is varied, not limited just to a single genre. Whatever artistically gives us emotions and
communicates, it’s listen with no prejudices.