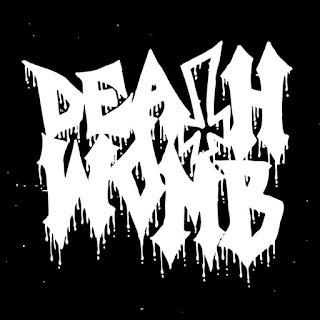 Deathwomb is a Black Metal band from Canary Islands, Spain. We recorded our first demo in 2017 and it had a good acceptance inside the purest Black Metal public. After that we recorded our first album that going to be released by Iron Bonehead Productions. The band is working on a couple of songs for a split 7” with Prophets Of Doom and rehearsing with the intention of play live at the end of 2019.

2.In April you have your first full length coming out, musically how does it differ from from the demo you had released in 2017?

It doesn't differ too much compared with the demo, I would say that the structures and the sound improved, it sounds more powerful but raw and dark at the same time, the demo was recorded/ mixed by ourselves whilst the LP was recorded by ourselves again but mixed/ mastered in studio. I think this is part of the natural evolution from the demo to something bigger.


3.Your lyrics show more of a darker side of occultism, can you tell us a little bit more about your interest in the dark arts?

I have always been interested on the dark side of  humanity and I've read some occultism articles, books, and notes, and a couple of years ago I tried to dig more about Enochian magic and satanic poetry and found a lot of inspiration from these sources.


4.Most of the other band members also play in other bands or projects. what is it that you bring into the music of 'Deathwomb', that you are not able to do with your other bands or groups?

We're involved in many projects because we know well to each other and our musical taste/ focus is the same. There is not much people in our area that understand of point of view about death/ black metal. In Deathwomb we have the opportunity of adding keyboards, obscure/ hypnotic guitar melodies or vocal effects that we never would play in our others projects.

5.What is the meaning and inspiration behind the name 'Deathwomb'?

The Virgin's pregnant womb full of laments and death.


6.Can you tell us a little bit more about the artwork that is presented on the new album cover?

It was taken from a Carlos Neves painting called “El Hospital Juarez” done back in 1951. We think that it fits petty good with the album's name/ concept. After sending the LP to the pressing plant we realised that another band used it before as cover artwork but we don't give a fuck to be honest.

7.On the new album the band expanded into a trio after being a duo for a while, what was the decision behind bringing in another member?

It was a natural addition as we all play together in Supremative and that is something that would happen sooner or later.

8.Has the band done any live shows or are there any planned for the future?

We never played live yet but we are rehearsing with the purpose of playimg live at the end of 2019.

It was really good from the very beginning. Our demo had an unexpected reception and all the copies were sold too fast, after that we got an offer to release an LP with Iron Bonehead so it culdn't be better.

At the moment we all play in Supremative, we recorded a LP recently that needs to be mixed/ mastered. Also, we're rehearsing for an US mini tour that we gonna do in June/July. We have other projects as Culto Profano or Necroven but those bands are on hold at the moment.

We'll try to keep the same sound or something even more raw and dark.

We got influenced by classics such as Demoncy, Beherit, Profanatica, Von, early Mystifier, Mortuary Drape, early Samael, Necromantia,etc. and some modern bands like Perverted Ceremony, Moenen of Xezbeth.
Personally during this week I listened  to Mortuary Drape's “Necromantic Doom Returns" compilation what is fantastic and some Running Wild, Venom, Autopsy, Deathhammer and something more that I forgot.

Posted by OccultBlackMetal at 5:14 PM