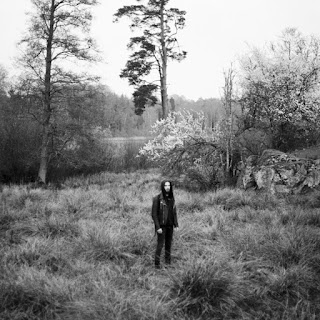 1.For those that have never heard of you before, can you tell us a little bit about the musical project?
1. I'm a Polish musician living in Scotland. La Mer is a solo atmospheric black metal project I started in April 2019. I have recently released the debut La Mer album titled "Silence" on my label Roadtrip God Inc.

2.In January you had released an album, can you tell us a little bit more about the musical style you went for on the recording?
2. I aimed for a cold and harsh atmosphere, somewhat reflecting the environment of the region where I live and write. The idea was for the guitars to serve a drone-like function where the vocals and drums carried the aggression and momentum of the songs. The inclusion of folk elements stemmed from my interest in fusing extreme music with instruments like the baglama saz (persian lute) or the balalaika, largely inspired by the works of the great composer Goran Bregović.

3.What are some of the lyrical topics and subjects you have explored so far with your music?
3. Primarily, I write about the fast-accelerating degeneration of human society and the symptoms of this decline. I write about religious zeal and aggression - observing how religion takes us away from nature, from reality, pragmatically damaging our understanding of the world and ourselves on a human level. It is an absurd concept that as a society, it is expected that we tolerate organised religious groups, which were founded on, and continue to spread hate and intolerance.

4.What is the meaning and inspiration behind the name 'La Mer'?
4. La Mer means "the sea" in French. I have always been fascinated by forces of nature and to me, the sea represents the unknown, bringing life and death in equal amounts. The connection to water has been a recurring subject in all of my previous works, being a constant element that connects my art. I felt it was an appropriate name to continue my journey.

5.Can you tell us a little bit more about the artwork that is presented on the new album cover?
5. The album cover is a drawing made by my wife years ago. The first time I saw it, I knew I'll seek to use it as album artwork one day. To me, the act of cannibalism depicted on the image perfectly represents where we are as a society,  matching the lyrical content of the album.

6.With this project you record everything by yourself, are you open to working with other musicians or do you prefer to work solo?
6. I enjoy working alone, but bringing other people into projects can create a welcome challenge. I have not yet found suitable people to collaborate with on La Mer, but I'm open to the idea.

7.The album was released on 'Roadtrip God Inc, can you tell us a little bit more about this label?
7. My original music project, Roadtrip God, started around 2010 and continued until 2017, when I made another record with my second band, Poison Water. Since then I started a couple more projects, including this one. "Roadtrip God Inc" works as a micro-label, helping me to manage and distribute my music on my own terms.

8.On a worldwide level how has the reaction been to your music by fans of black metal?
8. The response has been positive from many people, although as this is a new project, it has not been heard by vast numbers.

9.Are you also involved with any other bands or musical projects?
9. I'm actively working on two projects at the moment, La Mer and Poison Water. The latter is a band I formed with my wife who's been my collaborator since 2016, creating the artwork for all Roadtrip God Inc releases and fronting the band. Poison Water's music revolves around alternative and ambient rock genres. In the past, I have also worked on industrial rock (Roadtrip God) and rap projects (Kepler), which have been released on my label.

10.Where do you see yourself heading into as a musician during the future?
10. I hope to explore new musical territiories, work on potential collaborations and continue making new records with multiple bands, as long as it will be sustainable.

11.What are some of the bands or musical styles that have had an influence on your music and also what are you listening to nowadays?
11. When I was growing up, I was exposed to bands like Soundgarden and Alice in Chains. Later, my father introduced me to metal through works of Sepultura and Pantera, as well as more industrial/goth oriented bands like Sisters of Mercy, Marilyn Manson or Nine Inch Nails, which I still admire and find inspiration in. Nowadays I listen to a lot of death and black metal, namely bands like Mgła, Behemoth, Kriegsmaschine, Rotting Christ or Septicflesh. I find a lot of freedom in listening to a broad range of genres, as each one has a unique form of expression. Outside of metal, I currently enjoy the works of Chelsea Wolfe, the icelandic post-punk band Kaelan Mikla and Polish rap project called PRO8L3M, who show that outside of TV-propelled, shallow pop facade, rap is an intelligent and musically rich genre.

12.Before we wrap up this interview, do you have any final words or thoughts?
12. To finish, I'd like to thank you for the interview. For those taking an interest in my music, there will be two new releases from Roadtrip God Inc in the first half of 2020 - an EP by La Mer, titled "Kingdom of Hell" and an EP by Poison Water scheduled for March. Both works will be available at roadtripgod.com and the Roadtrip God Inc YouTube channel.

Posted by OccultBlackMetal at 8:37 PM