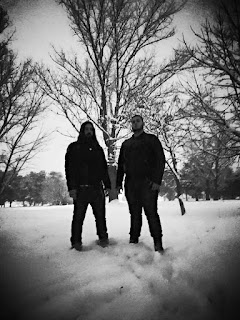 1.For those that have never heard of you before, can you tell us a little bit about the band?
1) Bezeha is a Black Metal duo who was formed at Serres, Greece, at 2016. The members are Mykonius at music and programming, and Zagan in the vocals. Our music is at the scales of old school Norwegian second wave Black Metal.

2.So far you have released one album, how would you describe the musical sound that is presented on the recording?
2) Our goal is to stay in the scales of classic Black Metal, nevertheless, we want to add our own touch in anything we are recording. That's what we think we managed to do in our first album, and that's what we want to continue doing to our second.

3.What are some of the lyrical topics and subjects the band explores with the music?
3) Through our lyrics, we try to pass our own messages referring to as much the social part, as much to religious and historical themes, although, to many of our songs, we have a mythistorical  style, usually using obscurantism and lyrics that are referring to Satan.

4.What is the meaning and inspiration behind the name 'Beheza'?
4) First we wanted to pick a name that when someone  hears it, he will connect it directly to the band and not meeting it elsewhere. Thus we created the name Bezeha, which is an anagram of three demons, of Beleath, of Zephar and of Halphas. In the near future we will write a song about how these three demons are connected and create the name "Bezeha".

5.Currently there are only 2 members in the band, are you open to expanding the line up or do you prefer to remain a duo?
5) Many people means many different opinions. And many different opinions means many compromises in anything you want to do. Now in our case, music is something that, if there are a  lot of members in a band, you will have many disagreements constantly leading to the unconciliation of all members, which means that a band could break up due to this, so we prefer maintaining our duo line up.

6.Currently you are unsigned, are you looking for a label or have received any interest?
6) We haven't searched yet for a record company, although we are open to any proposition, depending on the requirements of the company to be closer to our expectations.


7.On the album you had also done a 'Claudio Monteverdi cover, what was the decision behind doing your own version of this song?
7) Classic music is one of our favorite genre. At first, it was Mykonius's idea when he first listened to the original track, he thought that making a cover of it in Black Metal would be a challenge. We thought that it would be nice making it, so we continued in making it with the help of Christina Mavridou, soprano of the philharmonic orchestra of Serres in the vocal part. This track was the hardest part of "The Era Of The Northern City". It took us six months to complete it and many times we thought of giving it up, but eventually we managed to complete it and the result was satisfying.


8.On a worldwide level how has the feedback been to your music by fans of black metal?
8) It is yet time to say that people supports us, thinking that it's not much time since we released the album. Nevertheless, we have received many positive comments about it, and we would like to thank  everyone who supports us and everyone who would like to support us.

10 ) Our listening are mainly Norwegian second wave Black Metal bands such as Darkthrone, Burzum, Mayhem, Gorgoroth, Emperor, Satyricon and others. We want to stay in the scales of old school Norwegian Black Metal, but nevertheless put our signature with a Greek element such as "I Polis Ealo" and sometimes with our own experiments such as "Lamento Della Ninfa, Amor". Bold and difficult, but we want to believe that we finally did it.

12.Before we wrap up this interview, do you have any final words or thoughts?
12) We would like to say a great thank you to those who support us and to those who support the Underground music scene, along with you  for the effort you make. Stay Black Metal & Let the music take us ... 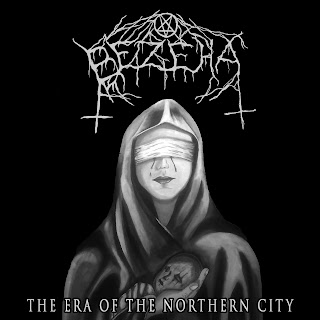 Posted by OccultBlackMetal at 5:11 PM