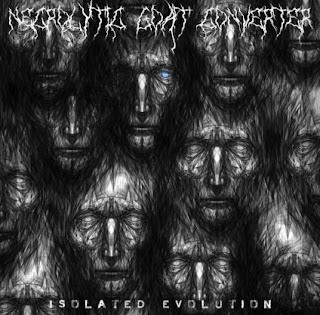 Distorted  yet  melodic  riffing  starts  off  the  album  along  with  some  some  beats  and  powerful  sounding  bass  guitars  a  few  seconds  later  and  after  awhile  high  pitched  depressive  black  metal  screams  start  to  make  their  presence  known  and  the  guitar  leads  also  bring  in  a  great  amount  of  melody.

Necrolytic  Goat  Converter  plays  a  style  of  depressive  black  metal  that  is  very  different  than  most  bands  of  this  genre,  the  production  sounds  very  raw  and  heavy  while  the  lyrics  cover  religion  and depression  themes.

https://necrogoatconverter.bandcamp.com/album/isolated-evolution
Posted by OccultBlackMetal at 12:52 PM