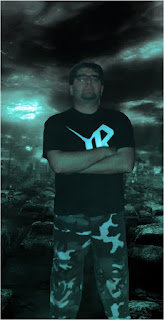 1.Can you give us an update on what has been going on with the musical project since the recording and release of the new album?

Hi there! Since the release of my new album "The Worst Is Yet To Come" in the beginning of the autumn, I am trying to promote it in different ways. As only two months passed, it's not really many things were happened, so I'd like to say, that it's a lot of work for me to do in the next months. Along with it, from time to time, I am writing some new music, and about 2-3 new compositions are already in the progress. Unfortunately, everything's moving not so actively as I would like it to be, because of not so much time I have for making new music... WIth every new year the free time's turning more and more valuable.

2.In September you had released a new album, what are some of the things you have done different musically with this recording that you have not been able to do with your previous releases?

Every new album of my project is another experiment, so every time I am trying to move on and bring on the table some new things, it can be some new style, sound, instruments, atmosphere, etc. If we're talking about the new album, I see it as kind of follower of the previous album "Neverending Terrorism", both in lyrical and musical directions. In the previous album my musical direction moved far away from Black Metal, to something I'd like to call "Melodic Dark Metal", that in fact is combining such styles like Thrash, Hard'n'Heavy, Doom, Black. The new album is in the same direction, but this time I've brought some Middle-Eastern elements, some melodic parts here and there, mainly because of using such instrument as Bouzouki. I like very much, how israeli Orphaned Land  uses such stuff in their songs, that's how I came to it actually. And it really turned suitable in my music (Yeah, but that doesn't mean that I'm a patriot of Israel, hehe). Beside of it, I used different guitar sound almost in every song for bringing the different atmosphere and mood.

3.What are some of the lyrical topics and subjects you explore with your newer music?

As I said, the new album is a follower of the previous one in lyrical theme, too. My actual lyrical conception is turning around the modern reality, absolutely stoopid and full of shit. The main topics are the internet/smartphone addiction (people like zombies, that don't see anything except "like", "repost", "messages" etc.), money that I call the only real "god" for the human creatures., islamic terror around the whole world, especially in Europe, something personal is "The Holy Land", the lyrics are about Israel, and all the shit that happens here, with nothing "holy" in it. What else? "Not For Devil Anymore" - about the honest true Rock/Metal movement's end, there were the days when the rockers and metalheads were the cause of nightmares for many parents, when this music was really scary and was called "Devil's music". Now the old musicians are finishing their ways, and the actual scene is just boring, open facebook of some Black Metal band or Thrash, Punk, no matter what - they just ask for people's "like", comment something... It's not the Devil's music anymore.

4.I know that the projects name means 'The Desecration' in Germany, how does this name fit in with the musical style that you play?

That's right, when I started this project in 2007, it was started as True Black Metal music, and I decided that "The Desecration" would be the best title for me, as that's Black Metal for me - this music in its right way brought the truth about all the dirt (mainly religious) of this world... It desecrated all the (so called) holiness. WIth the time, my music's gone from Black Metal, but the spirit's the same, and in my new lyrics I am continuing to "desecrate", haha. So I've been never regret about this name. You could ask, why it's in german - the simple story, I have found some more bands around the world with the same title "Desecration". So I moved to the language I learnt in my childhood - german. I have found fine option - Die Entweihung.

It's probably what the time will bring to us - Apocalypse soon or later, there's no any hidden meaning, it just symbolizing the title of the album - "The Worst Is Yet To Come". The cover picture was made by the guy from French BM project Tcherv, which in the beginning was planning to release this album on his own label. All the other design (booklet and cd itself) was made by my friend from Belarus - Konstantin (old Thrash/Death band V.E.L.D. co-founder and ex-guitar player).

6.Originally you are from Belarus but the project is based in Israel, can you tell us a little bit more about the move?

I moved to Israel, in 2004, because of the serious trouble with my left eye, the medicine in Belarus for that time (actually since there almost nohing's changed, hehe) was really bad, and what I've got in the hospital there - wasn't helped me really. There was a chance to get a better treatment in Israel - my family got the decision to move and... well, I started Die Entweihung in 2007, 3 years after my moving to Israel. I remember I read many comments about that "Israeli black metal" is non sense, different jokes about it etc. What can I say to all these guys - f*ck off! I am not religious at all, and my moving to Israel is just what's happened because of some not funny events in my life - not because I wanted to be closer to my god or bullshit like that. I'm sure, if my project was started in any other country, nobody would told anything.

7.With this project you record everything by yourself, do you feel this gives you more room to be creative with your musical style?

Sure, when I was a kid and just started to listen to Hard and Heavy music, I was dreaming about my own band, cool shows, long hair, but with the time, specially after my entering the Black Metal world, especially DSBM and True BM (Burzum, Abyssic Hate, Nargaroth and many more), I realized that I want to play that music and I don't need actually any other musicians. To play shows with this music - and it's just my opinion - is meaningless. This music is really intimate, for private listening and not for headbanging in the crowd with 2 liters of beer inside your body, haha! With the years, I have never thought to get some additional musicians, I have enough of knowledge in making the tracks for the instruments, I am satisfied with the production I have and with every new album I am getting better both in music and sound production. In addition, I can say, when the band is not the main job for its members, it will only headache with all these repetitions, preparing the new music etc. I saw many bands here in Israel and some bands in Belarus from the time I lived there - it's almost every year changing in line-up, the repetitions are often turning to another drinking party etc.. I think, you understand what I mean. Many bands split up after 3-5 years and not always they leave the one album although, and as for me, I think, that recorded stuff is the main goal of the musician. You can play as many shows as you can - but as your band's finished - who will remember about you if you even haven't recorded the EP or album?

8.On a worldwide level how has the reaction been to your newer music by fans of melodic black and dark metal?

I guess, the reaction was more or less positive, I haven't heard someting really negative yet, of course there are different opinions, and not all the reviews are super positive, some critics are useful as well, hehe. However, as I said in the beginning, the album was released just a couple of months ago and it's a lot of work to do to promote it, ask me, please, once again in the next year, hahaha!

I only hope to continue to write and record more good music, I'm sure, there will be more experiments in the next albums as well. I have some plans for the next album but won't be telling about them right now, as all this is just the ideas and nothing's confirmed yet.

In the beginning I was influenced a lot by Black Metal bands and projects, it was the time when DSBM style was raised, many great projects were playing. Last years I'm listening to Black Metal less than before, mainly some old stuff, as the new things aren't impressive for me. Now you can find absolutely different music in my CD player, I guess, as almost every music fan, I had a lot of periods when I was deeply diving into one style or another, nowadays I am just a musical fan, listening everything, from, let's say, 60's Rock stuff, like Beatles, Doors, Simon & Garfunkel etc, and untill some really heavy music - Black, Doom, Gothic, Folk Metal, 70-80's pop and rock, 90's electronic etc. Music is the ocean, haha!

The only one non musical interest I can call - the movies, mainly horror and thrillers, but I like the movies in general as well. Almost all the time I have outside my daily job, I give to the music. Except my own project, I write the reviews and interviews for ukrainian "Atmosfear" magazine, helping to translate the different interviews etc. There's one more fanzine I take part in - russian "Hellz Zine", but it's releasing very irregularly unfortunately. I collect CDs, vinyls, tapes as well.

I would like to thank you for this interview, it was pleasure to answer your questions! Usually the normal bands talk something like "We would really like to play in your country, wait for us, we will meet some day!". Well, I will not play in your country, don't wait for me, hahahaha! If you would like to write me something, feel free to do it via: entweihung666@gmail.com, thanks again, have a good winter, regards! - Denis

Posted by OccultBlackMetal at 9:15 PM