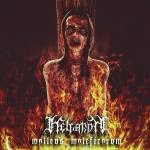 Helgardth  plays  a  style  of  black  metal  that  is  very  aggressive  and  melodic  sounding  while  also  getting  very  technical  at  times  and  adding  in  death  metal  influences  to  create  a  sound  of  their  own,  the  production  sounds  very  professional  for  being  a  self  released  recording  while  the  lyrics  cover  Witchcraft,  Occultism,  Death  and  Nihilism  themes.

https://www.facebook.com/HelgardhOfficial/?ref=page_internal
Posted by OccultBlackMetal at 6:08 PM