1.)For those that have never heard of you before, can you tell us a little bit about the band?
We are Cntmpt from Leipzig in Germany. We are three guys making music together. Drums (M.), Bass (B.) and Guitar and Vocals (me, S.). We play together for around 10 years now, but we all play also in different bands like Black Salvation, II, Evil Warriors and Vidargängr, to name just a few. We are actually just a circle of friends trying to create a big web of music and art in general. Cntmpt is one part of this creation we call „Into Endless Chaos“.


2.)In December you have a new album coming out, musically how does it differ from the            material that you have released in the past?
One thing is that its the first time we use vocals on the recordings. Its a bit more complex, but also more homogenic in compare to the last album. In general it feels like a step forward.


3. This is your first album in 4 years, can you tell us a little bit more about what was going on during that time span?
As i said, we all play also in other bands. So there is quite a lot going on most of the time. With the other bands we are also more active in the live section. Then there are other recordings, work and beer time. The material we recorded for „Towards Neglect“ does exist for a while as well and over the time it grew a bit and kind of a concept behind the album evolved.


4. the first album was all instrumental while the new album has some vocals, can you tell us a little bit more about going into this direction?
Well, it just came how it came. Actually we thought we will stay instrumental, but for some reason i tried to do some vocals while a rehearsal. Then we started to use it live. But actually most of the vocals on the album came spontaneously while a drunken recording-session. There are no lyrics in it, so its more like a additional instrument.

5. What is the meaning and inspiration behind the name 'Cntmpt'?
Verbalized its „contempt“ which stands kind of for our view on this selfcdestructing world and our selfcdestructing selfs. It stands for our contempt towards neglect...


6. Can you tell us a little bit more about the artwork that is presented on the new album cover?
It was drawn by our good friend A. Kavtea, who is in general a really good artist on the canvas and in his band Evil Warriors. Hes also part of our collective and made already a few cover artworks for several bands.
We worked really close together on this picture and in the end we all are quite satisfied about it.
The picture as itself goes hand in hand with the name of the songs, the story behind it and of course with the music. It stands for melting borders between our dimension, or world and the dimensions that lie below or above or behind ours. The horned dancers came out of a portal of fire and wind to guide a lonesome wanderer on his forthcoming road of light and darkness, pleasure and pain, of wine and water. They guide him into the mighty Wyrd.


7. What are some of the best shows that the band has played over the years and also how would you describe your stage performance?
We did not play live really often. Maybe two or three times a year, or even less. Every show was unique. Some were really good, pushing us and the audience into a state of trance, letting the waters flow. But there have also been shows, where the atmosphere just did not want to pulse in the same frequencies as we did.
Our stage performance is actually quite simple. Again three guys making music. We are just the tools for the music and if this works properly nobody cares who is on stage or in front of it.


8. Do you have any touring or show plans once the new album is released?
There is only one show planned so far. Its at the „A Sinister Purpose“ festival, which will take place in the wonderful „UT Connewitz“ in Leipzig in the beginning of february in 2019 with a lot of great bands. This festival is also organised by „Into Endless Chaos“. Mainly by a friend who is also singer in Vidargängr for example and who's doing the label stuff for „Into Endless Chaos“.
I guess we wont play live too often, but we will see how it comes.


9.On a worldwide level how has the reaction been to your music by fans of black metal?
To be honest...i have no idea. Apparently the russians like that style of music. But we also did not play outside of germany, so we are just not so well known, i guess.


10.What is going on with some of the other bands or musical projects these days that some of the band members are a part of?
Always a bit more or a bit less. Depending on whats the plan, if there are live shows or albums to record or so. You can check out the homepage of „Into Endless Chaos“ for example. There u can find most of our projects, with all the recordings and stuff. There came out some good records in the past years. Check out Evil Warriors`s „Fall From Reality“ or Goat Explosion`s „Rumors of Man“ or Abyssous`s „Mesa“ or Black Salvation`s „Uncertainty is Bliss“ or or or. Good shit.


11.Where do you see the band heading into musically during the future?
We will see where our monsters will carry us. There are no certain plans. We already have some new material in the gun, but that's not for the public yet.


12.What are some of the bands or musical styles that have had an influence on your music and also what are you listening to nowadays?
Well it evolved and changed over the years of course, but there are bands like Austere, Drudkh, Mayhem, Angst Skvadron, Autechre, Reverend Bizarre and many more. In the end everything influences us, whats crossing our road in a heavier or softer way.
And it always changes, what kind of music we are listening to. Sometimes more Black Metal, sometimes more Doom, or electronical stuff. No borders.

Remember kids! Always take too much of your medicine! 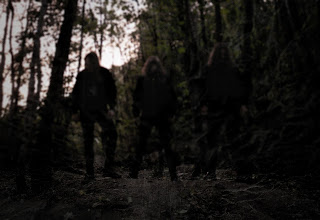 Posted by OccultBlackMetal at 9:25 PM