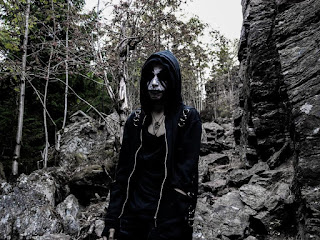 1.Can you give us an update on what is going on with the musical project these days?
Still working hard. In these days, Infernal Cult has a full line-up and we are rehearsing and planning gigs for next year mainly in Czech Republic but I hope It will be in foreign countries possible too. And about new stuff, next year will be released a compilation with all the old stuff including demo, first EP and singles so there are many things coming up...

2.In July you had released your first full length, how does the music differ from the stuff you had done on your previous ep's and demos?
It differs a lot. The stuff before was inspired mostly by classic themes and old school style of playing. But every release had a special meaning for progress because I want it to be further than every release before... Old stuff was mostly about general themes which are standard in Black Metal like nature, darkness, and dark atmosphere but after some time, It wasn’t enough for me. So I started to explore different styles of playing and I started to be inspired mostly by myself and put a piece of me to every song. So the album is total drift from the releases before.

3.In the beginning you wanted to play more of an old school and traditional style of black metal and your music has more diversity than that style, can you tell us a little bit more about your musical progress over the years?
I played the classic Black Metal style most of my time but I felt very limited by this “Black Metal box”. And as I like more styles of music and melodies so I wanted my music to be more evolved by different elements created only by myself and I realized that old school is not the right way. So I wrote my stuff differently, that I used only riffs and Ideas which came to me most spontaneously, completely fulfilled the atmosphere and emotions I wanted to express and that needed to think more different than before. Every Idea is inspired by myself and by my emotions, they are not created by other songs or other melodies and as I’m trying to learn every instrument more and more I want to add this progress to the writing process if it fits so the style is changing and moving forward... And sometimes the classic metal elements doesn’t get the thing I want to get out of me via music so I take some melody or Idea which is not “metal” as It should be so I transform It into something that fits to the song...The music is various and that is the way I want it to be...

4.What are some of the lyrical topics and subjects you explore on the newer release?
The lyrics are about my personal experiences which are about negativity, darkness, self destruction, self hate, sorrow, despair,emptiness, personal darkness, how I tried to kill myself multiple times and things I went through in my darkest hours and my views on life and living... But I didn’t wanted to make It like classic DSBM bands which use slow melodies, speeches and other stuff. I wanted to let people feel that sinister that I used to felt and make people find their own reasons of pain and desperation... All the lyrics are real and honest... The things in the lyrics are real and It is confirmed by acts...

5.What is the meaning and inspiration behind the name 'Infernal Cult'?
Well, maybe you now wait for a heartfelt story about how many meanings has the name and how I found It...But the truth is It doesn’t have any special meaning... I just wanted a strong name, easy to remember under which I will perform and one day I was lying in my bed and some seconds before I fell asleep, Infernal Cult flew to my mind... I liked It a lot so I decided that This is going to be on my flag...

6.Can you tell us a little bit more about the artwork that is presented on the album cover?
As you can see the main field is build-ed by a smoke, which represents the lights  which faded and in the middle is a person who spreads dark around and that means the negativity which the person went through... So the artwork represents negativity which is consuming you, space and neighborhood around you... Simply It is a person for whom “All The Lights Faded” and that is what the album is about...

7.On all of the recordings so far you have worked mostly as a solo project but a picture on facebook looks like you have a full line up, can you tell us a little bit more about it?
Yes I’m responsible for all the music, lyrics, artworks and everything in the project from its beginning... The guys on the photo are members who will play with me on the shows so I wanted to make some promo photos with them... But currently this line up on facebook is still not full because I found 2 more members after we made this promo so there will be definitely new photos with whole band later.

8.Currently you are unsigned, are you looking for a label or have received any interest?
Yes I want to find a solid label but It is very hard for starting band. I am opened for deals if some good label will appear because I am bored of making all the promo stuff, spreading CD’s, merch and many more things by myself. It costs me time and I think It is better when you have people who can help you with It. I love to create this things like making designs, artworks for ads, and promo but I hate that administrative part of this things so If there will be good label which will collaborate, I am opened for it.

9.On a worldwide level how has the reaction been to your music by fans of black metal?
The reaction was absolutely awesome and I was really surprised and quite nervous because of it... Releases before hit like 2k views on youtube until now but the album hit 2k views in two days and now there are about 10 300 views which is unbelievable for me and it is really satisfying that people outside accept my art... I had messages and comments from around the world. Many people wanted merch, CD’s and to be honest I was quite unprepared for this because I really didn’t expect that big response from people... It is a fuel for me when I see this support from others...

10.Where do you see yourself heading into as a musician in the future?
Well I love music. It is everything for me and I’m doing it because music helps feed my inner demons, woes, and I’m moving my style of playing forward and I want to create my unique style of playing to express everything I want ... I will go as far as I can. My music is me. With every release I’m moving forward with style of expression and everything what is around. I have my goals I want to reach and I’m going grimly for what I want and I will reach It... I’m still on start and I’m still learning...I have no borders in creating or boxing the style in some musical genre...Every artist want to grow with things he does... But I will never NEVER change my music because of people, label, or some others who will want It... I do music and everything as I want and It will never change...I’m heading high with my music. I want to open the eyes of the people and let them see the real evil and pain that my music represents.. And now It is awesome that It is really growing and I am really fucking grateful for It and I hope things will  be still moving on this way...

11.What are some of the bands or musical styles that have had an influence on your newer music and also what are you listening to nowadays?
I tried to be inspired only by myself during the writing process but if I had to name some of the bands so It would be mostly Shining, Bethlehem, Watain, Taake, Urgehal, The Cure, and Black Metal stuff from 90’. But I’m not listening to Black Metal much now. It became more the style of expression for me and nowadays I’m listening to many genres from classic rock, rap, to Indie pop, classical music etc... I have no limitation. There is quality in every genre and I take inspiration from every of them. The truth is that I used to listen to Black Metal for many years and It became very personal and “heart” thing for me.

12.Before we wrap up this interview, do you have any final words or thoughts?
Thank you all for your support, cherish your despair and spread your evil!

Posted by OccultBlackMetal at 5:12 PM