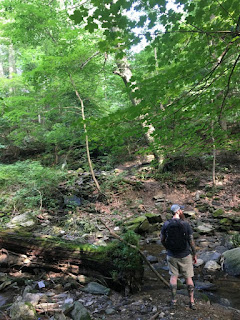 1.For those that have never heard of you before, can you tell us a little bit about the musical project?
Havens is the name I use to write and release music. I've written songs for years, but I hadn't ever released anything until some friends in 2016 showed me how to use computer software to record at home. In 2017, I put out "We Shall Meet Where There Is No Darkness" and most recently I put out "On The Verge Of Collapse".

2.Recently you have released your first full length, musically how does it differ from the ep you had released towards the end of 2017?
Besides the usual musical maturity that occurs as you write more material, "On The Verge Of Collapse" is a much heavier album altogether. The music is heavier, the lyrics are heavier and the vocals are screamed whereas the EP had clean vocals. However, I should mention that I plan to re-record the "We Shall Meet.." EP with screamed vocals at some point. I was less confident in my voice at the time, so singing was less of an artistic decision and more of a coping decision.

3.What are some of the lyrical topics and subjects you have explored so far with your music?
I took a look at my own mortality and my anxieties of which there are many. There's also some personal and political topics which are interrelated. For example, Generation Enslaved is about the private prison system in America and how the US incarcerates so many people, but told through then lens of my father who spent a good chunk of time in jail when I was a teenager and how that impacted me, him and our relationship.

4.What is the meaning and inspiration behind the name 'Havens'?
It's taken from a short instrumental song by Alcest from their "Les Voyages de l'Âme" album that I love. They're a favorite band of mine. But the word is perfect because, as I mentioned earlier, I have a lot of anxiety and I'm always looking for spaces that feel like a refuge or shelter, to give my brain rest. Listening to music, writing music and being a part of the music scene, has always been a sanctuary for me.

5.Can you tell us a little bit more about the artwork that is presented on the new album cover?
It was done by one of my best friends Ken Miller who is an absolutely incredible artist. He had been hearing the songs in various states of completion for months as I was working on them, so he had a deep understanding of the lyrical content and sound. He did a great job of capturing a visual representation of both the music and the lyrics.

Ken is available to do artwork. You can find his portfolio and more information at http://violentvisual.com/ and https://www.instagram.com/violentvisual/
He's also in a doom band called Seismic which you can check out here - https://www.facebook.com/seismicdoom/

6.With this project you record everything by yourself, do you have any experience playing in other bands or working with other musicians?
I have been in a lot of bands over the years, but I usually quit pretty quickly. In fact, I've been in two different bands with Ken, who did the artwork for "On The Verge Of Collapse". Ultimately, I realized that I prefer having full creative control and work at my own pace so it was best for me to work on things on my own.

On the recording end, I've never worked with another band. I am the definition of a hobbyist here. I just have a couple pieces of equipment to record myself in my home office.

I will say that in the future, I hope to be able to work with some other musicians on Havens songs. I'd like to be chiefly responsible for songwriting, but for example, being able to work with and record a real drummer would be great. I've also talked to some friends and acquaintances about the possibility of learning the songs so that we can play a few shows if there's any interest.

7.Currently you are unsigned, are you looking for a label or have received any interest?
I am not actively looking for a label. And I haven't had any labels reach out to me. I don't expect that there'd be much label interest. Writing music is something I do with my spare time. I have no plans to start doing heavy touring or anything like that to promote my music. But who knows? If there was label interest and everything worked out, I'm open to it.

8.On a worldwide level how has the reaction been to your music by fans of atmospheric black metal?
It's been pretty positive so far that I've seen. To be honest, I am humbled that there's any any interest whatsoever. I make music to scratch my own itch and battle my own demons, so when others get something out of it, that's just icing on the cake.

9.Where do you see yourself heading into as a musician during the future?
In the near future, now that the album is out, I'm working on trying to get together with some friends to rehearse the songs and maybe play a few shows in our area. And as I mentioned earlier, I'd like to go back and re-record the older EP with better vocals. We'll see. I don't want to invest too much energy into that, since it's looking backwards and not forward, but it'll bother me if I don't do it.

As far as writing new material, I am always working on things. I already have a bunch of rough ideas in various states of completion. I don't make any plans ahead of time about how things should sound or anything like that so I can't comment on musical direction.

10.What are some of the bands or musical styles that have had an influence on your music and also what are you listening to nowadays?
I've always been a music junkie and I've always had a wide array of tastes which all find their way into the music I write somehow or other. I listen to a lot of metal, I think that's obvious, but I'm also into a lot of 1990s alternative bands like The Smashing Pumpkins, Slowdive and Sigur Rós. And then there's stuff like Tragedy, His Hero Is Gone, Integrity and Assück - I enjoy the urgency that existed in the 1990s punk and hardcore scenes, especially the bands who were sorta on the fringe of those scenes and didn't quite fit in.

I still listen to all that stuff regularly nowadays, but if you're asking me what specific records I've been playing lately, I'd say:
Falls of Rauros - Patterns In Mythology. This album came out today and I've had it on repeat while I answered this interview. It's fantastic.
Slowdive - s/t. This English shoegaze band released a couple incredible records in the 1990s, broke up, reunited and released this amazing self-titled record in 2017. I listen to it constantly.
Woman is the Earth - Torch of our Final Night. I just discovered Woman is the Earth recently which is a shame because they've been around for a decade. This record is my favorite, but everything they've done is great.
The Ruins of Beverast - all. I went to Fire In The Mountains festival a week ago (that's why it took so long for me to respond, sorry about that). And this band's set was incredible, both musically and because of what happened during their set. I could explain, but you'd be better off searching for photos or videos.

11.What are some of your non musical interests?
I like to go hiking, camping, canoeing... anything outdoors really. I try to partake in those types of activities as much as I can. They rejuvenate my spirit. My wife and I also travel a lot, usually to do the aforementioned activities.

12.Before we wrap up this interview, do you have any final words or thoughts?
Thank you for the support. I really appreciate it.