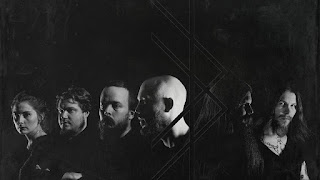 We have gone back to regular rehearsals and have begun writing material for the next album.

2.You have a new album coming out in June, musically how does it differ from the stuff you have released in the past?

I think this one offers a wider palette of sounds and styles. It’s more focused and better composed and also sounding much better, from a production stand-point. It’s still pretty dark and trippy though.

3.This is also your first release in over 5 years, can you tell us a little bit more about what has been going on during that time frame?

A lot of shit happened in that time. To cut it short we hired a new drummer and wrote material for this album. We also fell into some kind of hiatus for a while for different personal reasons. We finished the recordings about two years ago, and then went through a trial-and-error process of mixing and mastering but finally ending up with a result we are happy with. Since then we’ve been waiting for the right release window.

4.What are some of the lyrical topics and subjects the band explores with the newer music and also how would you describe your progress as songwriters over the years?

It’s pretty varied, since several of us write lyrics. However, for me, this album has a lot to do with exploring the deep woods of the mind and facing old and new demons.


5.I know that the bands name means ;cold' in Swedish, how does this name fit in with the musical style that you play?

The word has a dual meaning in Swedish. It stands for both ‘cold’ and ‘calling’. I think this name describes us pretty good, interpret it as you will. Some say this album is a little bit warmer to the touch than the last one though, hah!

6.The music that was done under the name 'Lifelover' was very much ahead of its time, do you feel that you helped inspire a new wave of depressive black metal bands with the stuff you have released in the past?

I think so, yes. What followed was however over all pretty boring and depressing, for the wrong reasons.

Some people seem to think that our style is hard to implement on stage. I think we all felt from the beginning that our style comes alive live while the recorded songs don’t necessarily do the songs justice. We try to make it as genuine and intense as we can and while we used to get pretty fucked up on stage earlier we’ve  grown up a little bit since then I hope (but probably not). One of our best gigs was probably at Garage in Bergen, Norway, for the Blastfest festival back in early 2015.

8.The new album is coming out on 'Prophecy Productions', how did you get in contact with this label?

We had worked with them for the last Lifelover album and we had gotten along with Martin early on, so when we were actually looking for a record deal we reached out to them again.

9.On a worldwide level how has the reaction been to your newer music by fans of black metal and other styles of underground and dark music?

I expect us to further develop our sound and styles further. You might even hear some clean vocals eventually, who knows! I just know it’s going to be dark, weird and very intense.

Anything and everything man. We compiled a list of songs that inspired us during the writing and recording process of the new album which you can check out here. You can either link the playlist on Spotify or use a shorter list we made for Youtube.

Thanks for the support, and a special thanks to everybody who has stayed with us and waited patiently for the new album. The wait has been rough on us also!

Posted by OccultBlackMetal at 10:32 PM