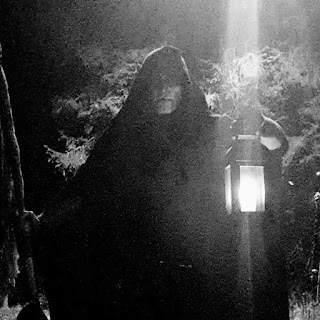 1.Can you give us an update on what has been going on with the solo project since the recording and release of the new album?

After the recording of "Lang Kald Natt" things have been quiet for some months. It is natural to let the instruments rest for a while after the recording and release of an album. Then after a while the needs start stirring again. So, right now I am in the early stages of preparing new songs.

2.Recently you have released a new album, can you tell us a little bit  more about the musical style that you have went for on the recording?

"Lang Kald Natt" is a metal album in my mind, and if you need to sharpen the genre definition any further, then I guess it is natural to tag it as Black Metal. It was important for me to get a really cold and harsh sound on the recording, and I believe I managed to get that. The original sound actually had to be smoothed out in  the mastering process, so it was probably a bit too cold and harsh, to be perfectly honest.

3.A lot of your lyrics cover dark forests, old folklore, destruction and spirituality themes, can you tell us a little bit more about your interests in these topics?

These topics have always defined me and inspired me. The folklore and superstitions from old can be very descriptive of both human mentality and the elements that surround us. Both the darkness and the vast beauty of nature have always been a massive inspiration to me. With all this follow the philosophical issues concerning our place in nature and the world as such. I feel that the music and the lyrics on "Lang Kald Natt" work very well together, and for me it is extremely important to bring forth a dark and lonely atmosphere, both musically and lyrically.

4.The solo project is from Norway a country that has had some very well known black metal bands over the last 3 past decades, musically how do you feel you stand out from the other bands or musical projects of your home country?

Well, time will tell if, or in what way, ENE will stand out from all the rest. That is not the motivation behind it, anyway. I just do what i like to do.

I wanted the artwork to be simple and classic, and that it should visually describe the music as clearly as possible. There is nothing fancy going on here, just a logo on top of a photo. I am pleased with it, I think it works well will both the music an the lyrics. There is the same solitary, dark and cold essence in that image, as is found in the recording itself.

I am used to doing recordings on my own, and  I am comfortable working like this. There is no other philosophy or necessity behind this choice, only the satisfaction of having everything done my way. Still, I will always  be open to working with others.

7.The new album was released on 'Hellstain Productions', can you tell us a little bit more about this label?

Hellstain Productions is a newly started record label, established in 2020 by Paul,  an old friend of mine. The dedication from this label is admirable, and Hellstain is in my opinion a label that deserves to grow to be a recognized name in time.

The reactions so far has been good, both from reviewers and from people just picking up the music from somewhere. The challenge is getting a new name like ENE to make an impression in an already vast and overfilled market. We'll just have to see what happens. Ultimately I do this for my own pleasure, after all, but it is still motivating to know that other people also enjoy the music I make.

9.Where do you see yourself heading into as a musician during the future?

In the future I see myself doing more of the same, in the same way I am doing things now. The ambition is solely to be able to work with  music in peace and quiet, and to get some good albums released.

As with most other people,  I have a quite diverse taste in music. It's hard to pin down which bands have  influneced the music I make, but I have grown up with bands like Iron Maiden, Slayer, Metallica and all that. Later came Bathory, Darkthrone and Burzum, and many more of course. I guess the influences come from all over the place. These days I am listening to a lot of the old Norwegian Black Metal classics from the 90's, as well as a fair amount of conventional classical music.

11.Does Satanism play any role in your music?

There is no defined Satanism in my music, although there is the deep fascination with the dark aspects of life, death and everything in  between.

https://www.instagram.com/ene.band.official/
Posted by OccultBlackMetal at 6:16 PM