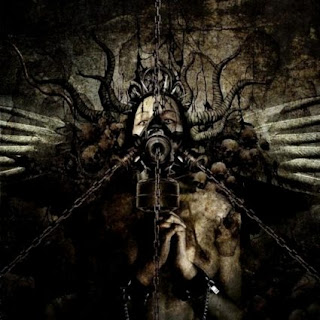 Bane are a band from Serbia that plays a form of brutal black metal that also has death metal influences and this is a review of their 2010 album "Chaos, Darkness And Emptiness" which was released by Abyss Records.

Drums range from slow, mid paced to fast drumming with a lot of brutal blast beats, while the bass playing has a very dark tone with riffs that follow the riffing that is coming out of the guitars and on some songs they sound very powerful, as for the keyboards when they are utilized they have a very dark and atmospheric sound that gives the music a lot darker and more epic edge with a lot of finger picking and full chords.

Rhythm guitars are mostly slow, mid paced, to fast black metal guitar riffs that also have a very heavy death metal influence to them and a great amount of melody and in addition one song has a very doomy feel to it, while the  lead guitars are very melodic black metal guitar solos that have a classic metal feel to them, as for the acoustic guitars when they are utilized they bring a very dark and melodic edge to the music.

Vocals are mostly high pitched black metal screams with some deep death metal growls being utilized a lot of themes with some occasional spoken word passages, while the lyrics are somewhat conceptual with the main themes being divided into Chaos, Darkness, and Emptiness and some of the lyrical subjects are about evilness and plagues, as for the production it has a very professional sound and all of the instruments come out with a very good sound.

In my opinion Bane are a very good amount and if you like black metal that has some death metal influences and a great touch of melody, you should check out  this band. RECOMMENDED TRACKS INCLUDE "The True Insomnia" "The Haunting Pressence" and "The Dawn No More Rises" which is a Dark Funeral cover. RECOMMENDED BUY.

Posted by OccultBlackMetal at 10:26 PM