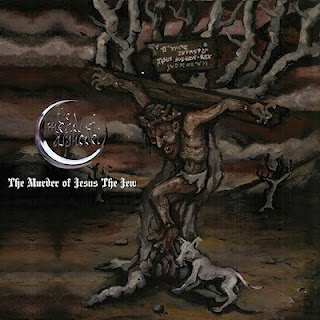 The Meads Of Asphodel are a band from the United Kingdom that have a long history with a musical style that I would describe as Anti Christian experimental black metal and this is a review of their 2010 album "The Murder Of Jesus The Jew" which will be released by Candlelight Records.

Drums alternate between slow, mid paced, to fast drumming with some brutal blast beats and percussion work that brings a very tribal sound to the music, while the keyboards and synths have an orchestrated classical music feel to them as well as an avant garde/experimental feel, as far for the bass playing it has a very strong and powerful tone which is very easy to hear on this recording.

Rhythm guitars are mostly slow, mid paced to fast black metal riffs with a lot of thrash, punk and traditional metal influences that also contain a lot of melody to them, while the lead guitars are very melodic guitar solos that have a very classic metal to them with some slide guitar being used at times which give the music a darker feel, as for the acoustic guitars when they are utilized they bring a classical/folk music feel to the music as well as some influences from progressive music.

Vocals are mostly high pitched black metal screams with some deep growls and clean singing male and female vocals being used at times, while the lyrics touch on Anti Christian and Satanic themes, as for the production it has a very heavy and professional sound to it with all of the musical instruments having a very good sound to them.

In my opinion this is another good album from The Meads of Asphodel and if you where a fan of their previous recordings, you should enjoy this recording. RECOMMENDED TRACKS INCLUDE "My Psychotic Sand Deity" "Dark Gethsenane" "Jew Killer" and "Genesis Of Death". RECOMMENDED BUY.

http://www.myspace.com/theofficialthemeadsofasphodel
Posted by OccultBlackMetal at 6:49 PM