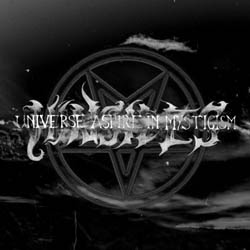 Hinsides are a band from Norway that plays a very dark and atmospheric form of black metal with avant garde tendencies, and this is a review of their 2010 album "Universe Aspire In Mystcism" which was released by Abyss Records.

Drums alternate between slow, mid paced to fast drumming with a lot of blast beats, while the bass playing has a very dark distorted sound which follows the riffing that is coming out of the guitars but has a lot of power on the intro, as for the synths when they are utilized they bring a very dark avant garde sound to the music.

Rhythm guitars alternate between slow, mid paced to fast raw black metal riffs and on a couple of songs there is a brief passage with some more slower soft playing, and there are little to no guitar solos or leads present on the album.

Vocals are mostly high pitched black metal screams with some spoken word passages being used on one song, while the lyrics cover ancient myths and the search for the universe of all times, the mysteries of the universe, and the parallels to the nature forces that surround us, with a great dose of satanic, and anti-christian themes with most of the songs being written in English but one song is written in Norwegian, as for the production it has a very dark and raw feel to it.

In my opinion Hinsides are a very good band, and if you like the raw classic Norwegian black metal sound with a small amount of avant garde tendencies, you should check out this group. RECOMMENDED TRACKS INCLUDE "666 To Nero" "Black Witchery Ritual" and "Universe Aspire". RECOMMENDED BUY.

Posted by OccultBlackMetal at 12:41 PM