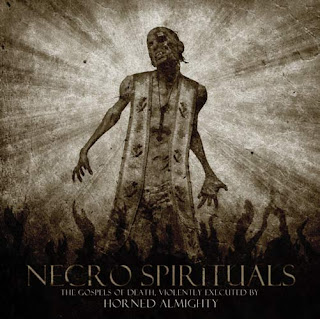 Horned Almighty are a band from Denmark that has a few albums and splits to their name, which also plays a style that I would describe as being raw black metal with a thrash/punk edge and this is a review of their 2010 album "Necro Spirituals" which will be released by Candlelight Records.

Drums alternate between slow, mid paced to fast drumming with some blast beats, while the bass playing seems to follow the riffs that are coming out of the guitars and at times they have a very powerful sound of their own which dominate throughout the album
, as for the synth it is only used briefly to enhance atmosphere and it is only used for a few seconds, with all the rest of the music between pure raw metal.

Rhythm guitars are mostly mid paced to fast raw black metal riffs that take a lot of thrash and punk influences and at times they have a black rock feel to them with some occasional slow doomy riffing, while the lead guitars are very primal and chaotic black metal guitar solos.

Vocals are mostly high pitched black metal screams with some deep growls being used at times, while the lyrics cover hateful themes with some anti Christian and Satanic themes which I would of liked to hear more of on this new album since there older lyrics where more Satanic, as for the production it has a very raw and heavy sound to it.

In my opinion this is another great album from Horned Almighty, and if you where a fan of their previous recordings, you will not be disappointed. RECOMMENDED TRACKS INCLUDE "Necro Spirituals" "Sworn Divine Vengeance" "Blessing The World In Pestilence" and "Absolved In The Sight Of God". RECOMMENDED BUY.