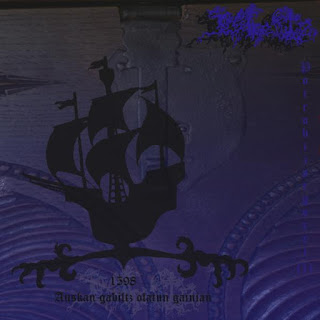 Ilbeltz are a band from Spain that started out as a more raw pagan black metal band with folk elements and on this album they go for a more folk direction while keeping the black metal elements and this is a review of their 2010 album "Auskan Gabiltz Olatun Gainian (1598 Potrobizargorri I)" which was self released.

Programmed drums have a very slow and primal sound to them with some fast beats, while all the folk instruments such as flutes, keyboards, accordions and violins bring a very ancient sounding folk music feel to the music, as for the bass playing it is mixed down low in the mix and seems to follow the riffing that is coming out of the guitars and at times they have a very powerful sound of their own.

Rhythm guitars when they are distorted have a very dark raw black metal feel to them and range from slow, mid paced to fast with some melodies and regular metal influences, while the lead guitars are very melodic sounding guitar solos that combine traditional and black metal together, as for the acoustic and classical guitars that have a very ancient pagan/folk music to them.

Harsh vocals are mostly high pitched black metal screams with the clean vocals being very melodic and have a combination of traditional metal and folk music influences, while the lyrics are written in Basque and cover Basque folklore, paganism as well as some Anti Christian and Satanic themes, as for the production which was recorded at various studios between the months of December 2009 to February 2010 has a very dark yet somewhat professional sound that brings to ancient folklore to the modern day.

In my opinion this is a great album from Ilbeltz and if you are a fan of pagan black metal that mixes folk music in their music you should check out this album. RECOMMENDED TRACKS INCLUDE "Maniel moxkortiyarena" and "Auskin gabiltz olatun gainien". RECOMMENDED BUY.

Posted by OccultBlackMetal at 3:10 PM