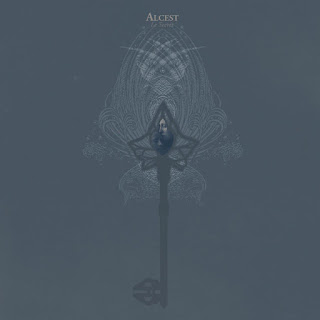 Alcest are a band from France that plays a very progressive form of shoegaze/post black metal and this is a review of their 2011 EP "Le Secret" which was originally recorded in 2005 but re-issued by Prophecy Productions with both the original and re-recorded versions.

Drums range from slow, mid paced to fast drumming with some blast beats being used at times, while the bass playing has a very dark tone with riffs that follow the riffing that is coming out of the guitars and at times they have a very powerful sound to them, as for the synths when they are utilized they bring a very dark and atmospheric sound to the music.

Rhythm guitars range from slow, mid paced to fast shoegaze/post black metal riffs that are a mixture of being both raw and primitive as well as melodic while the lead guitars are very primitive and melodic sounding black metal/shoegaze guitar solos and leads, as for the acoustic guitars when they are utilized they use finger picking and full chords to bring a very dark and progressive sound to the music.

Vocals are a mixture of clean singing and high pitched black metal screams with a brief use of whispered vocals, while the lyrics are written in French with themes that cover darkness and nature with one of the songs being a Charles Baudelaire poem being done to the music, as for the production it has a very dark, strong and powerful sound to it.

In my opinion Alcest are a very great sounding progressive post black metal/shoegaze band and if you are a fan of this style, you should check out this band. RECOMMENDED TRACKS INCLUDE "Le Secret(2011)" and "Elevation(2005)". RECOMMENDED BUY.

Posted by OccultBlackMetal at 11:58 PM