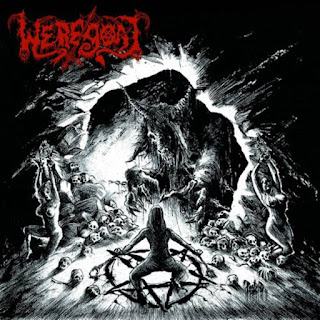 Weregoat are a band from Portland, Oregon with some members from established underground metal bands out there that plays a mixture of black, death, war and goat metal and this is a review of their 2012 album "Unholy Exaltation Of Fullmoon Preversity" which was released by Dark Descent Records.

Drums range from slow, mid paced to fast drumming with a good amount of blast beats being thrown into the music,while the bass playing has a very strong and powerful sound with primitive black/death metal riffing that dominates throughout the recording.

Rhythm guitars range from slow, mid paced to fast riffs that combine black, death, war and goat metal together to create a sound that is very dark, heavy and evil sounding in addition there is death/doom metal influences which is something that is usually not done in this sub genre while the lead guitars are very primitive sounding black/death metal guitar solos and leads.

Vocals are mostly deep black/death metal growls mixed in with some high pitched black metal screams, while the lyrics cover Occultism, Anti Christian and Dark themes, as for the production it has a very dark, heavy, raw and primitive sound to it.

In my opinion Weregoat are a very great sounding goat/black/death metal band that offers something different to the genre and if you are a fan of this style, you should check out this band. RECOMMENDED TRACKS INCLUDE "The Hideous Stench of Occult Slaughter" "Invoke The Black Oblivion" and "Antichrist Kommand". RECOMMENDED BUY.

www.reverbnation.com/weregoat
Posted by OccultBlackMetal at 5:33 PM