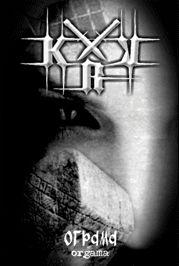 Krv where a band from Bosnia that plays a very raw and primitive form of pagan/black metal and this is a review of their 2010 album "Ograma" which was re-issued by War Productions during the year of 2012 and also contains some bonus tracks that where not on the original but where included on the 2007 ep "U Kamenom Grobu".

Drums range from slow, mid paced to fast drumming with some blast beats being thrown in at times, while the bass playing has a very dark tone with riffs that follow the riffing that is coming out of the guitars,a s for the sound effects when they are utilized they bring an avant garde/ambient edge to the music as well as some short samples being used before some songs.

Rhythm guitars range from slow, mid paced to fast pagan/black metal riffs that are melodic at times with the main focus being black instead of pagan while the bonus tracks are more in the old school black metal vein than the newer material, in addition there are some death metal influences in the riffing and on the bonus tracks they have a more thrash orientated sound, while the lead guitars are very chaotic sounding black/death metal guitar solos and leads when they are utilized which is mostly on the 2010 tracks.

Vocals are mostly high pitched black metal screams mixed in with some deep death metal growls which are mostly on the recent tracks instead of the bonus ones which where recorded 3 years earlier, while the lyrics are written in their native tongue with themes that cover Slavic Paganism and the political injustice of their homeland, as for the production it has a very dark, raw and primitive sound to it.

In my opinion Krv where very great sounding with their more older raw black metal and their newer black metal that has a death metal edge to it and if you are a fan of both styles, you should check out this band. RECOMMENDED TRACKS INCLUDE "Dok Laži se Diviš" "Ograma" "Oči Sudnjeg Dana" and "U Plamenu Vatre". RECOMMENDED BUY.

Posted by OccultBlackMetal at 9:17 PM