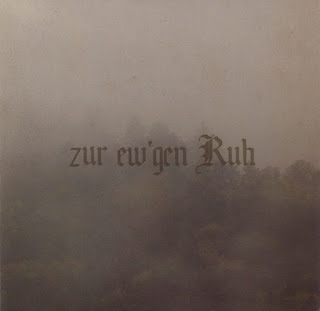 This is a review of a 2 Austrian bands teaming together Sturmpercht a neo-folk band and Rauchnacht a pagan ambient black metal band which together combine their 2 music styles together to create "Zur Ew ' Gen Ru" which was released by Steinklang Records during the year of 2011.

Flutes and other folk instruments bring a very dark pagan medieval neo-folk music sound to music, while the drums range from slow to mid paced playing with not much in the way of fast playing or blast beats, as for the synths they are only utilized briefly and they bring a very dark and atmospheric sound to the music.

Rhythm guitars range from slow to mid paced ambient black metal riffs that are very raw and primitive sounding mixed in with some dark sounding melodies and there are no guitar solos or leads present on this recording.

Vocals are a mixture of clean singing, whispered vocals, spoken word parts and grim sounding black metal screams, while the lyrics are written in German and cover nature and pagan orientated themes, as for the production it has a very dark, raw and primitive sound to it.

In my opinion this is a great split between Sturmpercht and Rauhnacht and if you are a fan of neo-folk or ambient black metal, you should check out this recording. RECOMMENDED TRACK "Track 2". RECOMMENDED BUY.

https://sturmpercht.bandcamp.com/album/zur-ewgen-ruh
Posted by OccultBlackMetal at 4:12 AM