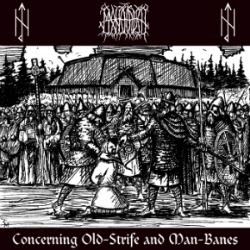 Stonehaven are a band from Kansas that has had a couple of their albums reviewed as well as being interviewed by this style that plays a very raw and primitive form of pagan black metal with folk music elements and this is a review of their 2012 album "Concerning Old-Strife And Man-Banes" which was released by Horror Pain Gore Death Productions.

Drums range from slow, mid paced to fast drumming with some blast beats being thrown into the music at times, while the bass playing has a very strong, powerful and heavy tone with primitive black metal riffing that dominates throughout the recording.

Rhythm guitars range from slow, mid paced to fast pagan/black metal riffs that utilize some melody that brings the folk music elements into the songs and traditional metal influences as well as a brief use of 80's style black/thrash riffing while the lead guitars when they are utilized are very primitive and melodic sounding black metal guitar leads that do not really turn into guitar solos.

Vocals are mostly high pitched black metal screams mixed in with some black/thrash style grunts as well as some depressive sounding cries, while the lyrics cover Icelandic Sagas, Norse Paganism, and a Pagan's refusal to convert to Christianity, as for the production it has a very heavy and dark sound to it while still retaining some raw and primitive elements.

In my opinion this is another great recording from Stonehaven and if you are a fan of this band, you should enjoy this album as well. RECOMMENDED TRACKS INCLUDE "Suffering The Swine Array" "Coins Under Corpses" and "Sword Rape". RECOMMENDED BUY.

BANDCAMP
Posted by OccultBlackMetal at 8:11 PM