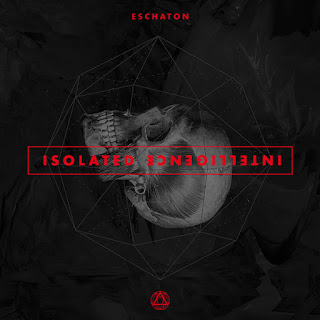 Eschaton are a band from Austria that plays a very brutal form of satanic/left hand path black metal and this is a review of their self released 2012 album "Isolated Intelligence".

Drums range from slow, mid paced to fast drumming with a great amount of blast beats being thrown into the music, while the bass playing has a very dark tone with riffs that follow the riffing that is coming out of the guitars and they sound very powerful towards the end of the last song.

Rhythm guitars range from slow, mid paced to fast black metal riffs that are very raw, primitive and brutal sounding mixed in with some influences from thrash and death metal as well as a groove element which is utilized very rarely in this genre mixed in with some melodies, in addition the songs are very long, while the lead guitars are very chaotic sounding black/death metal guitar solos and leads that utilize some melodies at times, in addition you can tell that the band are talented musicians in the instrumental.

Vocals are mostly high pitched black metal screams with a brief use of clean singing male and female vocals as well as a brief use of deep growls, while the lyrics cover Satanism, Sethianism, Luciferian, Left Hand Path, Occultism and Philosophy, as for the production it has a very strong, powerful and heavy sound to it.

In my opinion Eschaton are a very great sounding brutal satanic black metal band that brings in some different elements for this genre and if you are a fan of this style of music, you should check out this band. RECOMMENDED TRACKS INCLUDE "Transcending Satanism" and "A Storm To Purify The World". RECOMMENDED BUY.