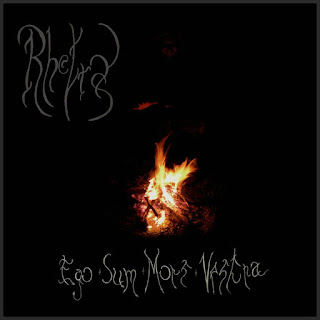 Rhetra are a duo from Italy that plays a very raw, dark and primitive form of black metal that has a melodic edge as well as more modern elements to it and this is a review of their 2012 album "Ego Sum Mors Vestra" which was released by Heder Music.

Drums range from mid paced to fast drumming with a good amount of blast beats being thrown into the music, while the bass playing has a very dark tone with riffs that follow the riffing that is coming out of the guitars.

Rhythm guitars range from mid paced to fast black metal riffs that are very raw and primitive sounding mixed in with some dark melodies and songs that are somewhat long in length while also having some shorter ones as well which also mix elements of old school and modern elements of black metal to update the music and there are little to no guitar solos or leads present on this recording.

Vocals are all high pitched black metal screams, while the lyrics cover dark and hateful themes, as for the production it has a very dark, raw and primitive sound to it.

In my opinion Rhetra are a very great sounding dark, raw and primitive black metal band and if you are a fan of this style, you should check out this band. RECOMMENDED TRACKS INCLUDE "Perpetual Reflorescence Of Pith" "No Mercy For The Vile" and "The Vengeance of The Moon". RECOMMENDED BUY.


www.rhetra.bandcamp.com
Posted by OccultBlackMetal at 6:20 PM