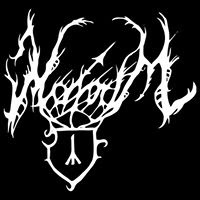 1.For those that have never heard of you before, can you tell us a little bit about the musical project?
P.: Mavorim is a one Man Black Metal Band from Germany which was founded in the Year of 2014.

2.Recently you have released your first full length, musically how does it differ from your previous split's, demo and ep?
P.:  I think the first two releases were a bit more orthodox in terms of Black Metal. More mysterious and raw. The last three releases are much more aggressive, thoughtful and more like a punch in the face.

3.What are some of the lyrical topics and subjects you have explored so far with your music?
P.: My lyrics often deal with violence, hate, madness, longing for past times, war, my ancestors, my homeland and the war against the modern world.

4.What is the meaning and inspiration behind the name 'Mavorim'?
P.: That's a little secret i keep to myself.

5.Can you tell us a little bit more about the artwork that is presented on the new album cover?
P.: The artwork consists of pictures of a very old castle in my hometown which is a very magical place full of history. The image of the owl on the back of the jewel case version and the Tape version was drawn by a very good friend exclusively for Mavorim.

7.You have also been a part of a couple of splits, can you tell us a little bit more about the bands or musical projects you have shared these recordings with?
P.: The first Split  "Memento Mori" was made with Meuchelmord. When i moved to Hannover Cernunnos and i became very good friends and so it was natural for us to do a Split in the future. Meuchelmord is a very great Band specially after the release of "Niedersachsen Schwarzmetall" wich became one of my highlights in 2018. Same with Totenwache. I got in contact with Res Bellicae before  Totenwache and Mavorim even existed and we also became very good Friends. The First day we talked about our plans to start a Project it was clear, that we would do a Split some day. All in all, Totenwache and Meuchelmord are two really great projects, which I respect humanely as well as musically! Total support!

8.On a worldwide level how has the reaction been to your music by fans of black metal?
P.: I got many messages from all over the world. To my surprise the reactions are positive all the way and I am very grateful for that!

9.Where do you see yourself heading into as a musician in the future?
P.: Well, I continue to write/record music and I will also try to play live with Mavorim in the future.

10.What are some of the bands or musical styles that have had an influence on your music and also what are you listening to nowadays?
P.: There where a lot of Bands that had an influence on my music such as Burzum, Leichenzug, Absurd, Hellfucked, Luror, Moonblood and many many more. I still listen to all of them. At the Time i listen to Circle of Dawn, Stahlfront and Temnozor a lot. Besides Black Metal and Metal in general, i like Synthwave and Folk Music a lot.
1
1.How would you describe your views on Paganism?
P.:I think Paganism is part of Europe and real Europeans. It would be good for us to get rid of those useless desert religions, get back to our roots and become one with our ancestors beliefs again.

12.Before we wrap up this interview, do you have any final words or thoughts?
P.: First of all, many thanks for the interest in Mavorim. I would also like to thank all comrades, and Friends for all the support! Hail to you!


Posted by OccultBlackMetal at 10:53 AM